Spirits high as sales of gin surge in the Republic 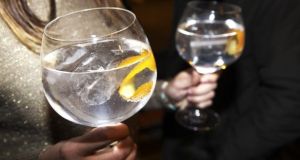 Sales of spirits have shot up on the back of a sharp jump in the number of people drinking gin.

New figures compiled by research company International Wine and Spirits Research show a 6.5 per cent jump last year in sales of spirits in the Republic to 2.4 million nine-litre cases from 2.25 million in 2017.

The increase was largely due to a spike in sales of gin, with volumes up 31.8 per cent to 324,000 nine-litre cases from 246,000 a year earlier. According to the data, gin volumes have practically trebled since 2014 with locally produced brands such as Shortcross, Bertha’s Revenge and Drumshanbo Gunpowder holding their own against artisanal names such as Hendrick’s, Monkey 47 and Bombay Sapphire, as well as more traditional brands such as Gordon’s. Sales of Gordon’s jumped 65 per cent in 2018 to 118,300 cases.

Sales of traditional gin were up 18.9 per cent while shipments of flavoured gin soared 438.4 per cent, albeit from a low base.

Between 2014 and 2016, sales of flavoured gins were nonexistent locally and only started rising in 2017 due in part to more artisan brands hitting the market and also because of an increasing profile for pink gins, which look good in Instagram shots.

Pink gin was traditionally defined as a gin with angostura bitters; it is now more commonly a gin enhanced with fruits such as raspberries, strawberries and rhubarb.

“A lot of retailers and bars have upped their game as well and are making huge efforts to present spirts well rather than hide them away, and this is having a positive impact,” he added.

While industry insiders have noted a rebound in sales of tequila and rum in other markets, Mr Cummins said neither had taken off in Ireland yet.

“We’ve seen little spikes in demand for both tequila and rum but then it tends to peter out. I’m in the game for 21 years and have seen that happen for gin a few times during that period,” he said. “But the last three years have been a case of mega-growth for the spirit, partly due to the popularity of pink gin.”

Although gin is back in fashion, vodka remains the by far the most popular spirit in the Republic, followed by Irish whiskey.