‘I went out and all of a sudden I got a puck off a bullock, and I was put flying against a wall’ 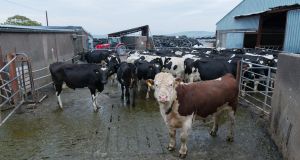 A dairy farm in the Dingle peninsula in Kerry. Photograph: Lionel Derimais

The Minister for Agriculture will meet stakeholders from across the farming sector next week to discuss safety initiatives following an increase in the number of farm deaths.

Last year, 21 people died on farms in the State, and there are fears this year’s death toll will be higher - based on the fact that 11 people were killed in the first four months .

Speaking at the launch of an Economic and Social Research Institute (ESRI) report titled, Risk-taking and Accidents on Irish Farms, on Wednesday, Minister of State for Employment and Small Business Pat Breen said the fact that the fatality rate among farmers is 10 times that of the average workforce is “totally unacceptable”.

Mr Breen told the audience of his own experiences hearing of deaths and injuries in his local farming community in Clare, and recounted a brush with danger he had on his own family farm a number of years ago.

“I went out and all of a sudden I got a puck off a bullock, and I was put flying against a wall. I was so lucky that bullock didn’t keep attacking me because he would have killed me. That opened my eyes as well – people on farms are unaware of the dangers, and we have to ensure that the message is out there.”

The minister further stated that the figures for farm deaths in Ireland are “disturbing” and that many fatal incidents are “totally avoidable”.

He revealed that Minister for Agriculture Michael Creed will next week convene a roundtable meeting involving farmer representative organisations and health and safety bodies which will discuss methods of ensuring safety on farms, ahead of what is traditionally the most dangerous time of the year.

Among the key findings in the ESRI study were that over a quarter of the 800 farmers interviewed typically do not seek help for difficult jobs, nor do they use safety equipment such as goggles or high-visibility vests.

Other risky practices included not checking that machinery is in good working order before use and not using restraints when treating animals, while 3 per cent of farmers admitted to storing chemicals within reach of children.

The subsequent report also carries a number of recommendations, including a suggestion that the mandatory farm safety statement should be linked to farm insurance renewals so as to encourage wider compliance.

Macra na Feirme chief executive Denis Duggan said his organisation will be making efforts to reach out to its nationwide network of young farmers in order to impress on them the importance of workplace safety in light of the ESRI’s findings and recommendations.

“I thought it was interesting where they mentioned about targeting the family members instead of directly targeting the farmer, in terms of maybe targeting the wife or girlfriend or vice-versa for a female farmer. But there’s definitely key lessons we can take from the report,” he said.