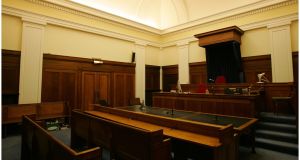 A technical manager with fruit and vegetable distributor Begley’s has denied any wrongdoing following allegations by her employer that she forwarded some confidential company information to her personal email. Photograph: Bryan O’Brien

A technical manager with fruit and vegetable distributor Begley’s has denied any wrongdoing following allegations by her employer that she forwarded some confidential company information to her personal email.

Terway Unlimited Company, trading as Begley’s Distribution, last Monday obtained interim orders ex parte (with one side only represented) against Agnieszka Luz requiring her to preserve the information and not disclose it. Earlier that day, it had suspended her.

When the matter returned before Mr Justice Brian O’Moore on Thursday, Marguerite Bolger SC, for Ms Luz, said her client denied any wrongdoing.

The judge was told the sides had agreed Ms Luz would provide undertakings in lieu of the interim orders and that agreement was made without prejudice to the position of either party in the litigation. On that basis, Mark Connaughton SC, with Maireád McKenna, for Begley’s, said the sides agreed thee matter could be adjourned to June 10th for mention.

The judge received the undertakings and, in response to concerns raised by Ms Bolger, said Ms Luz’s lawyers are entitled to examine the information at issue.

When granting the interim orders on Monday, the judge said he was doing so on the basis of taking at face value what company director Gregory Begley said in an affidavit about the nature of the information. There will clearly be an issue whether the material referred to is confidential or not and he had formed no view as to the rights of wrongs of the dispute, he said.

Mr Connaughton earlier told the court that Ms Luz, of Annfield View, Porterstown, Dublin 15, started work some 12 to 14 years ago with the company, had held various positions and is currently technical manager.

An investigation last year into a data breach at the company found no evidence Ms Luz was involved and the investigation, as far as she was concerned, had concluded, he said. A cohabitee was found in breach in disclosing certain details concerning remuneration, counsel said.

He said interactions last April and this month caused Mr Begley concerns in relation to Ms Luz, including she had accused him of trying to “exit her” from the company.

A May 22nd report by an IT consultant retained by the company identified some 600 individual emails across a variety of topics were copied and forwarded on dates in April and May to Ms Luz’s personal email address with a server in Poland, Mr Connaughton said.

His side maintained that included some highly sensitive company information. When Ms Luz arrived for work early on Monday, she had been addressed by Mr Begley about the data allegation, had not denied it but had not provided any information to Mr Begley, counsel said.

Her current status is an existing employee but suspended, he said. Later on Monday, before the court hearing, the company received a letter from solicitors for Ms Luz which did not deal substantively with the issues in the court application, counsel added.

1 In this strangest of recessions, what happens next for Ireland?
2 Michael O’Leary is the boss you want to lead an airline out of crisis
3 Estée Lauder staff at Dublin airport plan further strike action
4 European commission to appeal against €14.3bn Apple tax ruling
5 How to . . . move (almost) everything to your new phone
6 Air travel never going ‘back to way it was’
7 Over 36,700 employers register for new Covid wage subsidy scheme
8 Four Tesco shops open 24 hours
9 State body trebled loan approvals to homebuilders in six months
10 European investors fear second wave but Irish stocks outperform
Real news has value SUBSCRIBE