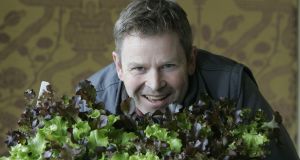 Niall McAllister: “By the end of this year 95 per cent of our UK business will be dealt with through our warehouses in the UK”

Quickcrop was established in 2010 by Niall McAllister and Andrew Davidson in response to growing public interest in self-sufficiency and growing food at home. The online business sells items such as wooden raised beds, soil, young plants, seeds and composting products. Eleven people are currently employed by Quickcrop in Co Sligo.

To date the company has serviced 35,000 customers online, and recorded turnover of around €2 million in 2019.

What was your reaction when you heard that the UK had voted to leave the EU?
Absolute shock. I hadn’t even thought of the prospect of the vote to leave going through. I went into the office the next day and said to Andrew “this is going to hurt”. And it did.

It has been a tough three years. There has been a lot of extra costs involved, not least in opening a new warehouse in Newcastle in the UK to try to streamline the supply chain in our UK market. At the same time the impact in the drop in sterling was hitting us very hard, as well as our sales growth being less than forecast. So there were three different things going on at the same time.

How is your business likely to be affected?
By the end of this year 95 per cent of our UK business will be dealt with through our warehouses in the UK. Initially we had to let two people go in our warehouse here in Ireland, but because of the growth of the Irish business we have those staff numbers back here now. The business has panned out quite well, but there has been a lot of pain in between.

When did you begin preparing for Brexit, and what contingency plans have you put in place?
Probably around six months after the vote. We have received a range of financial support and advice. The only real impact of Brexit from a sales point of view came in the last six months of 2019. However, since the election in the UK we have had a very good January in terms of our UK business.

Are you examining new markets/suppliers? And if so, how practical is that?
Yes. The wood for our Irish market is sourced here, and the products are made here. The products for the British side of the business are now sourced in the UK from a wood supplier in the north of England.

For the UK side of the business we will continue to use our British seed supplier, but for the Irish business we are now starting to look at European suppliers

Brexit is forcing us to look for suppliers in France and Germany, where we’ve already found a couple of very good suppliers. The language barrier has not been as difficult as anticipated when it comes to purchasing.

Our next step is to explore the retail market in Europe, which will be more of a challenge because, obviously, language is everything when selling online. We are 10 years in business now so looking for growth elsewhere in Europe was a natural progression for the business. However, Brexit probably forced us to look at it sooner.

When do you expect to be Brexit-ready?
We are now what I call “Brexit-active”.

What has concerned you most about the process so far?
How it has affected consumer confidence, particularly in the UK. People in the UK at the end of last year held off on larger spends in particular, which was a worry. Governments will shadow box with each other, eventually get a deal of some sort done, and business will move on. But sentiment is a much more difficult thing to recover.

And what has given you hope?
The Irish consumer seems to be much more focused on buying Irish or maybe not buying from the UK. This has allowed us to grow our Irish business a lot faster over the last three years than we anticipated.

Now that we are in the transition phase, how might the government help ease the pain of Brexit for your sector?
The Brexit loan scheme was a great initiative which we availed of, and it has helped us continue to invest and grow. However, as the pain of the process will now more than likely get worse from the end of 2020 and into 2021, it would be great to see this extended for a further three years.

How confident are you in the government’s ability to handle negotiations on a trade deal?
It depends on the government. I felt that [Tánaiste Simon] Coveney did well in playing the right cards at the right time in dealing with both Europe and the UK. Who the next government put in to continue these negotiations could be crucial. As with anything in business and government, a lot of this comes down to personalities and how they get on around a table.

In conversation with Ruth O’Connor