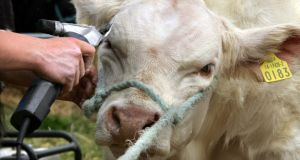 A bull calf at the Tullamore Show in 2009. File photograph: Eric Luke

The Department of Agriculture, Food and the Marine has secured expanded market access for Irish livestock exports to Algeria and said it was a potential market for young Irish bulls.

Because of the huge growth in the Irish dairy herd over the past number of years, hundreds of thousands of male calves are being born every year that have little value for farmers.

The fate of male calves being born on dairy farms is a matter of growing concern given that farmers are unlikely to be inclined to spend money on their welfare.

A similar situation in New Zealand was a cause of major controversy there last year because of animal welfare scandals. Cork vet Bill Cashman has suggested it might be kinder if the male calves were culled.

The national dairy herd has grown to about 1.6 million, from one million, over the past decade. The peak month for the birth of calves is February.

During an Irish trade visit to Algeria, the authorities there signed a certificate for the export of cattle for slaughter from Ireland with immediate effect, the department said.

This follows agreement last year on certificates for export of cattle for breeding and fattening.

There were about 100,000 live cattle imports from other countries to Algeria last year, of which 75 per cent were young bulls, the department pointed out. Algeria is a potential market for the sale of young Irish bulls by way of live export.

Mr Cashman told The Irish Times that the news of a deal with Algeria might give value to the male calves, and this in turn might be positive news in terms of the calves’ welfare.

“Anything that increases their value increases the chances of good welfare, but you’ll have other people who will say that transporting these animals this distance is savage and cruelty and we’re putting them in countries that we shouldn’t be.”

The agreement with Algeria offers significant opportunities for Irish livestock exports and reflects the high standard of animal health and welfare in Ireland, the department said.

It said the stringent systems of animal health and welfare controls operated by the department protected the welfare of cattle during transport.

The meeting in Algeria also progressed discussions on market access for beef and mutton exports, the department said.