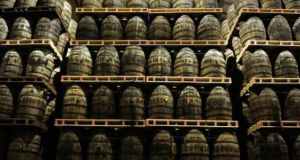 Irish whiskey is now recognised and protected in one form or another in more than 50 international markets, with moves to achieve protection in another 26 countries under way.

Industry body the Irish Whiskey Association (IWA), said it was pushing particularly hard to see a new geographic indication (GI) law come into force in Russia next August, that would pave the way for protection in the region.

Irish whiskey received protection in seven new markets this year. Four of these, covering Australia, India, South Africa and Taiwan, were secured on foot of applications from the IWA. A further three with China, Japan and Singapore were the result of European Union agreements.

“Securing legal protection for Irish whiskey in seven international markets throughout 2019 is a milestone for our industry and represents a major achievement in our continued efforts to protect the integrity of Irish whiskey on a worldwide basis,” said Carleen Madigan, legal advisor to the Ibec-affiliated association.

Whiskey sales have flourished in recent years, passing the $1 billion (€1.2 billion) milestone for the first time in 2018 in the US, its biggest market. However, as sales have growth so have complaints regarding the rise of fake Irish whiskey across the globe.

Securing protection for whiskey gives producers a legal remedy to crack down on fake competitors. In addition, consumers are usually willing to pay more for GI products, because they trust the origin and authenticity of goods.

“Securing these protections means that only Irish whiskey distilled and matured on the island of Ireland can be labelled and sold as Irish whiskey in these markets. It means we will be able to take much tougher enforcement action against fake Irish whiskey products. Protection will support the future growth of Irish whiskey and reinforces the authenticity of our category,” said Ms Madigan.

Irish whiskey was granted the GI status by the European Commission earlier this year. It means that as with champagne and prosciutto, whiskey can be marked with a sign indicating the geographical origin and a product’s unique qualities and production methods.