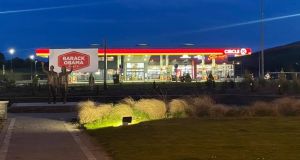 Supermac’s has got planning permission for a €10 million Barack Obama Plaza-style motorway facility outside Ennis in Co Clare, off the M18 motorway.

The grant by Clare County Council for the development at Kilbreckan, Doora, outside Ennis is the latest twist in a planning saga that has lasted for just under five years.

The fast-food business lodged its first plan in January 2016 for a motorway plaza outside Ennis. It attracted opposition from a number of local Ennis businesses.

A previous application was marred in controversy after it emerged in 2018 that bogus letters of support were lodged with the council.

At the time, Supermac’s said it was it was “horrified” to learn from the media about the bogus letters “and disowns the actions taken and wants to distance itself completely from them”.

On Friday, chief executive of Supermac’s, Pat McDonagh said he was “delighted” with the council’s decision.

“There is nothing on that motorway between Limerick and Tuam. There is something going to go on it somewhere and it will be a big loss to Ennis if they don’t get one there.”

He added: “I believe that it will be very good for Clare and for Ennis and good for employment in that area.”

Mr McDonagh said the plan will provide about 100 jobs.

“It is a win-win situation.”

The Ennis proposal is not of the same scale as the Obama plaza at Moneygall, Mr McDonagh said.

Mr McDonagh said a lot of local people have been asking him over the last number of years: “When are ye going to open in Ennis?”.

He stated: “There is a need for it obviously otherwise they wouldn’t be asking the question.”

Mr McDonagh said that similar Supermac’s developments outside other towns have not negatively impacted on those locations.

One group objection from five local businesses who are all members of the Ennis Chamber of Commence said that due to the excessive scale of the the proposal, it “will act as a counter attraction” to Ennis and Clarecastle and “have a detrimental impact on the vitality and viability of those centres”.

Third parties have the option of appealing the council decision to An Bord Pleanála.