Irish excise is second-highest in Europe behind Finland, according to industry group 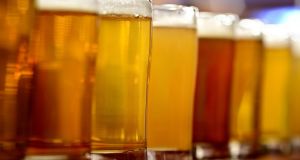 “In many parts of rural Ireland, drinks, hospitality and tourism businesses are the primary and sometimes only employers.” Photograph: iStock

The drinks industry is calling for a cut in excise duties on alcohol to help Ireland’s rural hospitality businesses avoid potential job losses and business closures resulting from Brexit.

A new report commissioned by the Drinks Industry Group of Ireland (DIGI) says hospitality businesses account for 9.5 per cent of employment in the west of Ireland – above the national average of 7.6 per cent. These jobs are “highly vulnerable” to an economic shock such as a hard or “no deal” Brexit, it warns.

The group is seeking a “defensive” cut in excise duties on alcohol in October’s budget to help businesses offset the worst potential effects of the UK’s exit from the European Union, the style of which has yet to be negotiated.

The report by DCU-based economist Anthony Foley notes that the drinks industry directly and indirectly employs about 90,000 people.

“In many parts of rural Ireland, drinks, hospitality and tourism businesses are the primary and sometimes only employers,” said DIGI chairwoman Rosemary Garth. “This makes these areas highly vulnerable to economic shocks like Brexit.”

Ms Garth said a hard Brexit or further devaluation of sterling will result in lower spending from British tourists, either because they take fewer holidays or have a smaller budget when they travel to the euro zone.

“Considering the British are our single biggest tourism market, this is a significant problem for rural areas that completely rely on foreign spend to power their local economy.”

Although arrivals from Britain have recovered 2.3 per cent in the first half of 2018, Tourism Ireland has said it is too early call it a turnaround in last year’s declining trend, which saw visitors to the State from Britain falling 7 per cent.

British visitor numbers were still 4 per cent lower in the first six months than in the same period of 2016, before the Brexit referendum of June 23rd led to a plunge in the value of the pound against both the dollar and the euro.

“By reducing excise, not only would the Government be rewarding consumers by putting more money back in their pockets, it would be helping to defend producers, retailers and other businesses across Ireland from the worst impacts of economic uncertainty,” said Ms Garth.

She added that the risk of a hard Brexit, compounded by current excise rates, risked damaging growth in drinks manufacturing.

1 Lockdown exit: How can Irish economy reopen without big health risks?
2 Finance ministers gather as fears grow even the future of the euro zone is at risk
3 I want to change my will quickly in case I fall ill. Do I need a lawyer?
4 Property market has not felt full impact of Covid-19, warns Sherry FitzGerald
5 Coronavirus: How Covid-19 may reshape the Irish retail landscape
6 Government announces €1bn in supports for businesses
7 Iseq 20 companies lose €34bn in value due to pandemic
8 Facing economic meltdown ... and nothing wrong with our economy
9 Coronavirus: Property rental in the jaws of the epidemic
10 MCD’s Desmond ‘optimistic’ that Electric Picnic 2020 will go ahead
Real news has value SUBSCRIBE