Roadmap allows restaurants to reopen more than a month before pubs 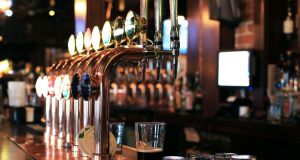 Under the Government’s plans, pubs are supposed to reopen at the fifth phase of the lifting of lockdown restrictions while restaurants are allowed to reopen from the third phase. Photograph: iStock

More than four in every 10 Dublin pubs intend to reopen as restaurants at the end of June rather than wait until August 10th when pubs are slated to reopen under the Government’s roadmap to lifting lockdown restrictions.

According to figures from the Licensed Vintners Association (LVA), a trade group which represents pubs in the capital, 44 per cent of pubs plan to reopen their premises on June 29th.

Under the Government’s plans, pubs are supposed to reopen at the fifth phase of the lifting of lockdown restrictions while restaurants are allowed to reopen from the third phase.

The LVA said that its figures suggest that about 330 pubs will reopen at the third phase to serve food on their premises on the same basis as restaurants given that they have restaurant certificates “and accordingly are licensed restaurants”.

Publican Charlie Chawke was among the first to say he would reopen some of his establishments as they have restaurant licences in addition to liquor permits.

The LVA’s survey shows that not all pubs that serve food intend to open at the end of June. Some 72 per cent confirmed that they serve food on their premises.

Nevertheless, the LVA want all pubs that serve food to be allowed to open on June 29th.

“This again highlights the urgent need for the Government to engage with the pub sector,” said LVA chief executive Donall O’Keeffe.

“Food is a major aspect of their business so why should they be treated differently to other venues serving food and alcohol? We expect there will be a strong demand for these venues, with many pubs reporting a significant public appetite for when they will be serving food again.”

More than 50 per cent of the LVA’s membership, amounting to more than 300 pubs, engaged with the survey for which responses were collected on Monday and Tuesday of this week.

“We made it clear this would happen when the roadmap was announced, but we are still awaiting a meeting with Government to discuss the future for pubs, despite their public comments that they will meet the vintner organisations quickly. Our members cannot remain in limbo and are now actively planning for reopening on the same basis and at the same time as restaurants,” Mr O’Keeffe added.