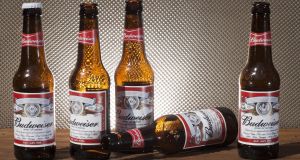 Revenue from Budweiser, Stella Artois and Corona dropped 11 per cent in the first quarter. Photograph: iStock

Brewer Anheuser-Busch InBev warned on Thursday that its biggest three beer brands – Budweiser, Stella Artois and Corona – are bearing the brunt of a collapse in sales caused by the coronavirus.

Revenue from those brands dropped 11 per cent in the first quarter, about twice the rate of decline for the company’s overall portfolio of more than 500 labels.

Shipments plunged the most in China, where the effect of Covid-19 lockdowns hit hardest because they started earlier than in the United States and Europe.

As demand evaporates amid a global shutdown of bars and restaurants, AB InBev and rivals Heineken and Carlsberg are racing to find ways to cut costs to reduce the effect on profit.

So far AB InBev’s more expensive products are suffering less, but in the longer term, as the pain from a pandemic-induced recession spreads from blue-collar to white-collar workers, that could also harm the collection of niche premium labels that AB InBev has built up in past years.

AB InBev is in more of a pinch than Heineken and Carlsberg, given that it’s also struggling to reduce its pile of debt that stood at $96 billion at the end of 2019.

The brewer said on Thursday that shipments plunged 32 per cent in April. Budweiser, Stella and Corona are in its mid-priced segment in the US.

Carlsberg said last week that it was already preparing for a new normal in which more profitable craft labels face more competition from cheaper alternatives.

Cut-price beer is performing well in some markets, such as South Africa. AB InBev was already seeing its inexpensive Lion Lager grow at a double-digit rate in the first quarter there before its production and distribution was halted to comply with a government mandate.

China’s lockdowns were largely responsible for AB InBev’s 9.3 per cent decline in total first-quarter shipments, and excluding that market, the decline was only 3.6 per cent. That may bode badly for Europe and the US, which entered lockdowns later.

While some craft breweries are seeing surging demand from drinkers looking to prop up local producers, catastrophic levels of unemployment in the US in the longer term may eventually lead those consumers to switch to less glamorous labels such as Bud Light.

“There will be permanent economic damage and the shape of this recession is likely to impact low-income workers hardest, and we probably will see some downtrading as a result of this,” Trevor Stirling, an analyst at Sanford C Bernstein, said. – Bloomberg

1 Why are markets booming when a crash is on the way?
2 How much do Irish people earn? And what will Covid-19 do to our wages?
3 Drumcondra credit union collapses as merger plan fails
4 Dunnes Stores trials online ordering from Cornelscourt outlet
5 Could your old car be giving away all your secrets to its new owner?
6 British pound sinking to ‘emerging market currency’ status
7 No free lunch on coronavirus cash payments
8 Government’s budget deficit balloons to €5.3bn on back of Covid spending
9 Pfizer and BioNTech’s Covid-19 vaccine trial yields positive results
10 Aryzta needs to sell €600m of assets to reset business, shareholders claim
Real news has value SUBSCRIBE