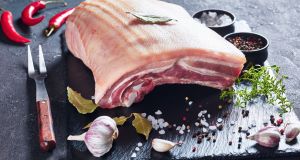 M&M Walshe employs about 550 staff across its three sites in Tipperary, Kilkenny and Redditch in the UK. Photograph: iStock

The acquisition, for an undisclosed sum, will be integrated into a company created by CapVest called Eight Fifty Food Group. The company was created to house UK pork processor Karro Food Group, which CapVest acquired in 2017, and Young’s Seafood, which it acquired in July last year.

M&M Walshe, which has three trading arms – RibWorld, Callan Bacon and Stirchley Bacon – employs about 550 staff across its three sites in Tipperary, Kilkenny and Redditch in the UK. Accounts for the year to the end of April 2019, the latest available for the company, show that it posted turnover of €113.7 million and profit before tax of €655,269.

The acquisition will increase the volume of sales in the Eight Fifty Food Group to about £1.4 billion (€1.59 billion) and the company will employ more than 7,500 staff across its 19 sites in the UK and Ireland. The Walshe family, who have operated the business since its foundation in 1981, will remain involved with the company.

Eight Fifty is predominantly focused on the UK and Irish markets, although its existing divisions have been growing exports into the Asian, north American and European markets. The company sits alongside CapVest’s other major food group which operates in both the UK and Ireland, Valeo Foods, which was established in 2010 through the merger of Batchelors with Origin Enterprise’s consumer foods unit. Valeo also controls the Jacob Fruitfield Food Group and brands such as Robert Roberts, Odlums, Fox’s mints, Erin, Kelkin and Chef.

The deal is subject to approval from the Competition and Consumer Protection Commission.