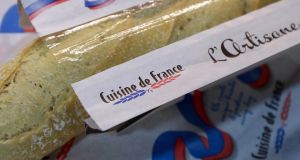 Shares in Aryzta fell again yesterday amid speculation that the company may be sold off or radically restructured in a bid to restore shareholder value.

The Swiss-Irish food company has appointed investment bankers Rothschild to review the strategic and financial options available to it.

This has led to speculation that the company behind Cuisine de France bread and Otis Spunkmeyer donuts could be preparing to put itself up for sale.

Market sources, however, downplayed the prospect of a sale in the current climate with asset prices on the floor because of the Covid-19 pandemic.

A more likely option, they said, was a restructuring of the company’s complex capital structure.

As part of its turnaround programme, Aryzta has reduced its net debt position, long seen as a problem for the company, to about €400-€500 million via the disposal of several non-core assets, including its stake in French frozen foods group Picard.

However, Aryzta has a further €1 billion of subordinated – or hybrid – financial instruments which it records as equity under accounting rules.

The market, however, views it as off-balance sheet debt. This is said to be weighing heavily on the company’s share price, which now sits at a record low of just 31 cent in Dublin and 0.33 Swiss Francs in Zurich, marking a 98 per cent collapse in value for shareholders over five years.

Market sources suggest these financial instruments could be converted in normal shareholder equity under a restructuring. While this might be dilutive for shareholders initially, it could reverse the decline in share value over time.

Other sources have speculated that the company may sell off its troubled US business, which has big contracts with fast-food chains such as McDonald’s and Subway.

About 70 per cent of Aryzta’s US business is tied into the food service channel, which has been on lockdown as a result of the pandemic, placing further pressure on the company.

The company’s US arm has been underperforming other parts of the business for several years and its North American chief executive Dave Johnson exited the role earlier this year.

Cobas opposed Aryzta’s recent restructuring plan, which involved a €790 million rights issue, on the grounds that it was too dilutive to existing shareholders.

At the time, the fund manager advocated selling Aryzta’s US business.

The company has been forced to halt production in three bakeries in Europe and five in North America and furlough more than 30 per cent of its staff as a result of the lockdown.