John Moloney is joining board along with one of owner’s sons, Mark Goodman 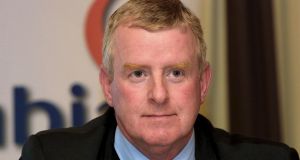 Former Glanbia boss John Moloney is joining the board of Larry Goodman’s meat business ABP Food along with one of the owner’s sons, Mark Goodman.

ABP announced that five new directors were joining its board while four, Ron Bolger, John Jackson, Philip Morgan and another of Mr Goodman’s sons, Laurence P Goodman, were stepping down.

Accountant Fergal O’Dwyer and long-time ABP executives Tom Kirwan and Finbarr McDonnell will join Mr Moloney and Mark Goodman on the board, the meat processor said.

Mr Moloney is a former managing director of Glanbia, which owns Avonmore Milk, and worked in the meat business early in his career.

He is chairman of fuel and electronic goods distributor DCC and a non-executive of cardboard box maker Smurfit Kappa.

Mark Goodman has worked at various ABP factories over the last 15 years. He has been head of its international division since 2011 where he has worked on boosting sales in Asia.

Mr Kirwan stepped down as ABP UK managing director last October. He has worked for that arm of the business since the 1990s. He joined the group in 1982.

Mr O’Dwyer is due to step down as chief financial officer of DCC in July. A chartered accountant, he has experience in financial management, corporate development and acquisitions.

Mr McDonnell joined ABP in the 1970s. He has been group chief operations officer since 2017. Larry Goodman remains as executive chairman.