Alarm bells ringing from the Vatican to the Phoenix Park 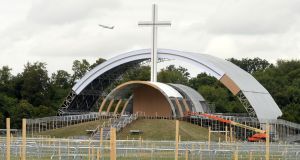 Work under way at the site of the World Meeting of Families Phoenix Park Mass with Pope Francis.Photograph: Dara Mac Dónaill / The Irish Times

The ringing of bells usually indicates celebration, but bells also alert communities to imminent danger. When Pope Francis is welcomed by President Michael D Higgins in the Phoenix Park next week, he may remember that, on their first meeting in the Vatican last year, the President presented the pontiff with a Climate Bell, a beautiful object that warns against an ugly future.

This was one of the series of bells, sculpted by the Irish artist Vivienne Roche for the President, to sound a symbolic warning, to world leaders and ordinary citizens alike, about the threat of accelerating climate change. Both the pope and Higgins have repeatedly expressed their urgent concern about this issue, and linked it to social justice. Their shared position is striking, especially given their other differences in world view.

Most of the global indicators, scientific and political, are pointing to an ever more rapid onset and devastating climate crisis

In his remarkable 2015 encyclical, Laudato Si’, the pope warns against the delusion that we are “lords and masters, entitled to plunder her [THE EARTH]at will”. He adds that “Humanity is called to recognise the need for changes of lifestyle, production and consumption,” in order to halt, or at least slow down, the potentially catastrophic climate shifts set in motion through increasing greenhouse gas emissions.

Higgins has openly questioned national policies, such as increasing the dairy herd, which are rapidly making climate matters worse at home. He has called out, at least implicitly, those world leaders who seem bent on undermining the few and fragile international accords that have been reached.

Yet both men know that their own power to affect policy is very limited. And in the relatively brief period since their Vatican encounter, most of the global indicators, scientific and political, are pointing to an ever more rapid onset and devastating climate crisis.

President Donald Trump has withdrawn the US from the Paris climate agreement, and is instead increasing American emissions. Meanwhile, the EU is increasingly mired in backward-looking identity politics, even as the migration tragedy in the Mediterranean reminds us that, for many nations, climate catastrophe is not in the future: it is already upon us. The soaring toll of extreme weather events this summer, at home and abroad, echoes the same grim message.

As several stories in this newspaper this month have spelled out in stark detail, Ireland’s “green” image no longer conceals the reality of successive governments’ shameful inaction and policy failures in this field. On the contrary, current policies may soon have us topping the league of EU climate offenders.We must all hope that Pope Francis uses his visit here to ring out again the warning that our reckless behaviour is threatening every aspect of our welfare on this Earth. And that our leaders, as well as individual citizens, have ears to hear the sound of that bell ringing.

3 What will €8.9m buy in Dublin, Switzerland, France, Spain and London?

5 Lives Lost to Covid-19: Tommy Cawley, the bull man of Bellmullet and a winning jiver