Group has implemented actions to preserve cash and manage expenditure 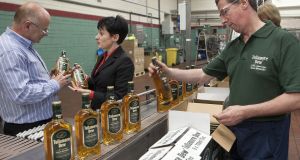 The impact of the Covid-19 pandemic has significantly reduced demand for products made by the company which produces Tullamore Dew whiskey.

That is according to directors for William Grant & Sons Irish Manufacturing Ltd, who say higher costs resulted in the company recording a pre-tax loss of €3.73 million in 2019. The pre-tax loss followed a pre-tax profit of €320,000 in 2018.

The business recorded the pre-tax loss in spite of revenues increasing by 7 per cent from €43.29 million to €46.35 million.

The directors state that in 2019 production volumes at Tullamore were lower than in 2018 .They say overall capital expenditure continued to focus on initiatives to improve efficiency, increase distilling and packaging capacity and increase warehouse capacity.

On the drop in demand for the company’s products due to the pandemic, the directors state “how demand will evolve going forward is at this time unclear. However, the impact on the wider group could be considerable in a worst-case scenario.”

The directors say in response to Covid-19 the group has taken measures to help communities in which the business operates. This includes the group’s distilleries stepping up to supply alcohol for hand sanitiser on a grand scale, currently approaching eight million litres of pure alcohol. Hand sanitiser production is also under way at the company’s own bottling location.

The directors say the group has implemented a number of actions to preserve cash and manage expenditure.

The financial strength and geographical spread of the business allows the directors to conclude that the company is well placed to manage its business successfully despite the current uncertain economic outlook.

The loss in 2019 takes account of non-cash depreciation costs of €8.3 million.

Media and social media attacks have also been labelled a “major threat to the company” by the directors.

They say “through the increasing number and growing influence of social media networks, the company faces the risk of being exposed to significant media coverage of inappropriate publications or messages. This could have a significant impact on the company’s reputation.”