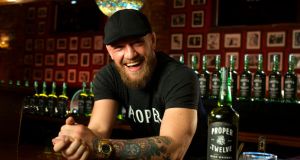 Conor McGregor’s Proper Twelve whiskey has proven a hit with people who may know little about whiskey but lots about UFC.

Conor McGregor has always been regarded as a mixed blessing for Irish whiskey since launching his Proper Twelve Irish whiskey. His high profile has helped make the spirit better known globally but the negative headlines that he often attracts worry many in the sector.

Now the fighter looks set to leave the whiskey industry, having earned a proper payday for a spirit launched just three years ago.

Becle, the owner of the tequila brand Jose Cuervo and the Bushmills distillery, is in the process of acquiring the 51 per cent of Eire Born Spirits it doesn’t already own. Eire Born was established by McGregor and others in 2018 to milk his popularity with Proper Twelve Whiskey, a brand that has proven a hit with people who may know little about whiskey but lots about UFC.

The Mexican drinks company has just secured a $150 million (€127.42 million) loan to acquire the rest of Eire Born, which includes McGregor’s stake. With no financial details being disclosed it is impossible to know just how much the Irish fighter will receive but speculation is rife that it could be more than $100 million.

It also remains to be seen if McGregor will be cutting his ties completely with Proper Twelve or if there might be a future role for him.

Taking ownership of Eire Born makes sense for Cuervo if you look at the numbers. Proper Twelve launched in September 2018 and only in a few markets initially. But it quickly overtook many other well-established brands to become the fourth best-selling Irish whiskey globally behind Jameson, Tullamore Dew and Bushmills.

Yet it is also an odd move as it means the company going downmarket when almost every other Irish whiskey brand owner is moving in the other direction.

With Covid-19 vaccines now being rolled out around the world, Proper Twelve’s new owners will have to demonstrate their own fighting spirit to lift it off the canvas as pubs and duty free shops reopen globally.