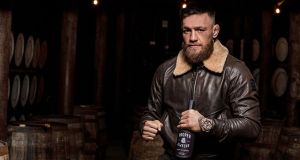 Proper No Twelve launched in September 2018

The owner of the Jose Cuervo tequila brand has secured a $150 million (€127.3 million) loan to acquire the remaining stake it doesn’t already own in the company behind Conor McGregor’s Proper No Twelve whiskey.

Becle earlier this month disclosed in a note with its fourth quarter results that it was to acquire a 51 per cent stake in Eire Born Spirits. The investment includes buying out the mixed martial arts fighter’s stake in the company in a move that is expected to result in a significant pay day for McGregor.

Becle, which acquired the Bushmills brand from Diageo in 2014, took an initial stake in Eire Born when it was founded by McGregor, his manager – Paradigm Sports Management chief executive Audie Attar, and spirts industry entrepreneur Ken Austin, in 2019.

It exercised an option last year to increase its ownership stake in Eire Born to 49 per cent in a deal that valued the company at $235 million (€199 million).

Proper No Twelve launched in September 2018, initially in Ireland and the United States. The brand, which is also available in the United Kingdom and Australia, sold out a six-month allocation in its first 10 days.

While sales were significantly behind the top three Irish whiskey brands – Jameson, Tullamoe Dew and Bushmills – Proper No Twelve leapfrogged the likes of Paddy, Kilbeggan, Powers and Teeling in to become the fourth most popular brand in the world in 2019.

Becle said on Monday it has borrowed $150 million in funding under a new term loan credit facility to finance additional shares in Eire Born in a deal that is expected to be completed in the coming days. The transaction is still subject to regulatory closing conditions.

No financial details have been disclosed regarding the deal outside of news of the credit facility.

Guinness parent Diageo agreed to trade Bushmills to Becle’s flagship brand Jose Cuervo as part of a deal to acquire full control of Tequila Don Julio and $408 million (€346 million) in cash in late 2014.

Proper No Twelve is made at the Bushmills distillery in Co Antrim.