Danu Partners expands in Boston and creates US holding company

New restaurant group will have revenues of $100m and employ 1,000 people 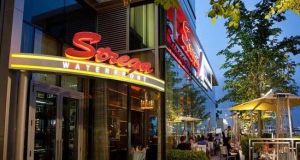 The Irish owner of the well-known Smith & Wollensky chain of American steakhouses is expanding its business in the US with a recent deal to acquire three restaurants in Boston.

Danu Partners has created a new holding company, PPX Hospitality Brands, to oversee its growing business on the east coast following completion of a deal last week to take over the well-known Strega restaurants from the Varano Group for an undisclosed sum.

The newly-created restaurant group will have annual revenues of $100 million (€90.1 million) and employ 1,000 people.

PPX, which will oversee both of the Danu brands, is to be led by Michael Feighery, chief executive of Smith & Wollensky Restaurant Group.

Danu Partners is an Irish investment group established by Leonard Ryan, Mark O’Meara and Mickey O’Rourke, better known in Ireland as the founders of Setanta Sports and formerly a partner in the Mercantile Group of pubs before selling its stake for more than €10 million in 2017.

It owns the Smith & Wollensky chain, a high-end steakhouse brand operating six restaurants in the US and one apiece in London and Taipei, Taiwan.

The brand was established in New York in 1977 by Alan Stillman, the founder of TGI Fridays, who still owns the original Smith & Woollensky restaurant in midtown Manhattan.

The deal with the Verano Group covers the Strega Waterfront, Strip by Strega, Strega Prime and Cafe Strega, as well as server cafes and a catering business, all of which are located in Boston.

The original landmark Strega restaurant, Strega North End, will continue to be owned and operated by Varano Group.

“The acquisition of the Strega Group is an attractive opportunity to add highly complementary Boston-based operating businesses to our hospitality portfolio,” said Mr Ryan. “We believe in the long-term potential of this market and look forward to investing in these restaurants and the talented teams that operate them,” he added.