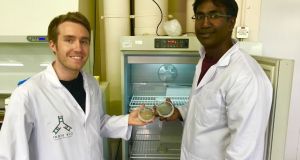 MicroSynbiotiX, a Cork-based biotech start-up that is developing oral vaccines to help combat infections in fish stocks, has secured €1 million in seed funding from investors which include entrepreneur Sean O’Sullivan’s SOSV.

Established in April 2016 by Simon Jegan Porphy and Antonio Lamb, the company is a former participant in RebelBio, the life sciences accelerator programme established by SOSV in Cork city.

Alimentos Ventures, a Germany-based early stage aquaculture investor led the funding round, the proceeds of which are to be used to help develop the company’s products. Other participants in the round included SOSV, Enterprise Ireland, RebelBio and Yield Lab Ireland.

Speaking to The Irish Times, Mr Porphy said millions of tons of quality seafood are currently being lost each year due to diseases. The company is seeking to address this through a novel, patent-pending method of producing oral vaccines using transgenic microalgae.

The company currently employs five people in Cork but intends to create at least 12 jobs locally over the next four years. MicroSynbiotiX also has an R&D facility in San Diego.

“We have made significant progress in terms of development over the last 12 months with two possible product candidates right now. We also have a collaboration with UCC that is ongoing,” said Mr Porphy.

“Cork is a great city to be based in as we have received a lot of support, including receiving funding for a feasibility study from the local enterprise agency when we were only getting started,” he added.