Cider sales fizzle out even as exports jump on Brexit stockpiling 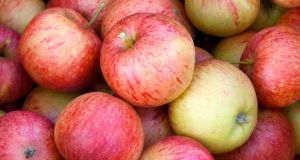 Over 50,000 tonnes of apples are used every year to manufacture cider locally.

More than 63 million litres of cider was sold in 2019 with its market share here declining marginally from 7.5 per cent to 7.4 per cent. Cider is the fourth most popular alcoholic beverage in the Republic behind beer, spirits and wine.

A breakdown of figures show that of the 63 million litres consumed in the Republic last year, 51.15 million litres was produced locally, up from 50.5 million a year earlier.

According to Drinks Ireland Cider, which compiled the latest figures, cider drinkers in the Republic pay the third highest rate of excise in the European Union.

It said over 50,000 tonnes of apples are used every year to manufacture cider locally. Additionally, the sector contributed just under € 60 million in taxes to the Exchequer last year and some € 500 million over the past decade.

Drinks Cider Ireland said that as with the wider drinks industry, the sector has been severely impacted by Covid-19. The industry body has called for a number of supports to help the sector including cashflow supports, the deferral of excise and VAT payments and a reduction of the commercial rate charge.

The organisation has also urged the Government to allow for direct selling by craft cider producers.

1 Belgium helps Ireland to a Brexit boon
2 ‘My rent here is so low it’s a joke’
3 Can Grafton Street stop the flood of closures?
4 New Powerscourt Springs hotel to open in defiance of virus gloom
5 ‘Sad day’ for House of Ireland as tourism retailer goes out of business
6 AIB to compensate another 1,100 tracker mortgage holders
7 Big Four told to outline plans for audit split in UK by October
8 This charming man: how Paschal Donohoe won the Eurogroup presidency
9 I tried out deep fake app Doublicat. The results were terrifying
10 Irish tech firm to facilitate cashless tickets for hurling and football
Real news has value SUBSCRIBE