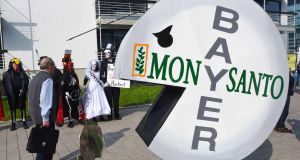 A protester wears a pill shaped costume bearing the names of Bayer and Monsanto during a demonstration against the takeover of US seeds and pesticides maker Monsanto by German chemicals firm Bayer outside the annual General meeting of Bayer. Patrik Stollarz/AFP/Getty Images

The Monsanto company name, which has become synonymous with genetically modified food and as a longstanding target of environmental activists, will disappear after the completion of its $63 billion (€54 billion) sale to the German company Bayer on Thursday.

Bayer, a pharmaceuticals and chemicals giant, said on Monday it would immediately retire the 117-year-old Monsanto brand name. “Bayer will remain the company name. Monsanto will no longer be a company name,” it said in a statement. “The acquired products will retain their brand names and become part of the Bayer portfolio.”

Monsanto has long been targeted by environmental activists for its pioneering role in creating GM crops and the deadly herbicide Agent Orange, used by the United States in the Vietnam war.

The company, which was founded in St Louis, Missouri, in 1901, has been described as an “example of American corporate evil”. Bayer’s chairman, Werner Baumann, promised the company would engage with campaigners, who have described the takeover as a “marriage made in hell”.

“We aim to deepen our dialogue with society. We will listen to our critics and work together where we find common ground,” Mr Baumann said. “Agriculture is too important to allow ideological differences to bring progress to a standstill. We have to talk to each other. We need to listen to each other. It’s the only way to build bridges.”

Adrian Bebb, a food and farming campaigner at Friends of the Earth Europe, said Bayer’s decision to ditch the Monsanto name would not alter the company’s legacy.

“Bayer will become Monsanto in all but name unless it takes drastic measures to distance itself from the US chemical giant’s controversial past,” he said. “If it continues to peddle dangerous pesticides and unwanted GMOs then it will quickly find itself dealing with the same global resistance that Monsanto did.”

Friends of the Earth has run a long campaign to try to prevent the takeover, which it warned would “increase control over farmers and cut out competitors, and allow it to become the dominant ‘Facebook of farming’ ”.

Bayer won approval for the takeover from US and European regulators after agreeing to sell $9 billion worth of assets to reduce the combined companies’ dominance of the global seeds market.

“The acquisition of Monsanto is a strategic milestone in strengthening our portfolio of leading businesses in health and nutrition,” Mr Baumann said. “We will double the size of our agriculture business and create a leading innovation engine in agriculture, positioning us to better serve our customers and unlock the long-term growth potential in the sector.” – Guardian service 2018