What’s a third level degree worth these days?

What if you don't like the course you signed up to? Would you drop out or change course? Laura Roddy reports. 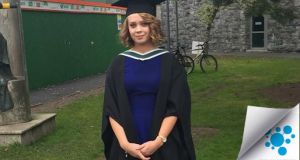 Laura Roddy on her graduation day.

I attended my graduation a few days ago. After countless assignments and dozens of exams, I finally have a piece of paper to hang on my wall. I’m proud of my accomplishment. The experiences I have lived through, the people I’ve met, the knowledge I’ve gained and the work ethic I’ve adopted in those past years are indispensible.

But, increasingly, a part of me is questioning the value of a third level degree.

We’re told by parents and teachers that a good third level qualification is absolutely vital if you ever hope to get a good job.

On the face of it, they’re right.

Take a look through many of the Irish job sites. Most job specifications require a graduate degree in a related field and armfuls of experience. The more you progress at third level the more employable you are, the larger your paycheque is.

But the reality is many students feel stuck in third level course they have little or no interest in. In 2014 the National Student Survey showed that 44% of students were unhappy with their current college courses and would apply differently if they were filling out their CAO forms again.

Many of these students will, regardless, struggle on unhappy, failing exams until sometime later after half their soul has been destroyed,  they will finally decide to leave. Others will not be deterred, scraping passes and graduating in a degree of study that they loathed, unemployable, because no one is going to want an unenthused graduate whose average is 48 per cent.

None of this should be a surprise.

While some students know exactly what they want to be when they grow up, the majority of young people don’t have an idea. The number of third level courses has mushroomed over recent years, only adding to the sense of confusion.
Prospective students take a look through a fresh, glue-smelling book, talk to a cousin that was in UCC, a friend in WIT, attend the opening day in GMIT and then decide to study marine-biology in UCD.  It is during that short online moment - when they fill out their college choices - that students make profound and often random decisions which are likely to shape the rest of their lives.

The following September they begin their college course. But they realise they don’t enjoy molecular biology.  It turns out, they had no idea they would be studying ecosystems. Some will drop out. They will face the wrath of disappointed parents whose only wish for their chid was to fit into Irish society’s expectations. But at least they will be free and will have more time to think about what they wish to do with their future.

Throughout my time at college I saw this all the time. Some students chose the right courses for them, others the wrong ones. It baffled me that someone who was so unhappy in a college course wouldn’t change or do something else. Many seem to think they just need a good degree – any degree - behind them,

But are third level degrees really so important that students should be willing to put up with courses they don’t like and end up in jobs they’ve little real appetite for?

During my third year of college I spent time in London, where I undertook an independent project as part of my Creative Writing degree. By day I worked in a Mexican restaurant and by night I wrote fictional stories under the supervision of a published author.

While there, I lived with a girl who dropped out of college because she disliked her course. She had done two internships in theatre marketing and had come to London to do her third. During the day she worked unpaid and at night she was an usher at a theatre in the city centre in order to make money. After two months in London she bagged a great job with a theatre marketing company that owns 70 per cent of the West End.

I was baffled, I had always thought you could only get a good job with a university degree behind you, at least that’s the way it is in Ireland.
While in London I also received a job offer from a friend who was working with IPC Media. I would’ve been working in iPad productions, putting magazines onto iPads. The company had contracts with publications like NME, Horse & Hound and InStyle. They were looking for a new member of staff and my friend asked me if I was interested.

My initial reaction was that I don’t have a degree. But he assured me there were a lot of other people in his office who didn’t have a degree either.
They trained you in and you worked your way up through the company, he told me. Again, I couldn’t believe it; I had been offered a twelve-month contract that started on £27,000 which at the time was around €33,000  a year. This was more than a primary teacher who had spent three years at university received in the UK.

Of course the offer really caught my attention. But inside my Irishness pulled me back, asking ‘what do you want to be when you grow up Laura?’ Never once had I said I wanted to work in iPad production so the little voice said ‘finish out your degree.’ I did.

I returned to NUI Galway the following year and finished my degree.

These days, I have a much more questioning approach to the importance we place on degrees.

Most employers look for a lot more in people than a first or second-class honours. They’re looking for people who are sociable and enterprising. People who have the ability to work in teams and create a network of contacts. Potential workers who are enthusiastic about doing a good job.

You don’t often hear about this on your journey through the education system. In reality, a degree is a platform to get yourself into the labour market. But so much depends on your contacts, on your ability to put yourself forward and make your own opportunities.

It’s time we told students that all of that is just as important as a piece of paper hanging on the wall.

Have you something to say? Email us at: studenthub@irishtimes.com