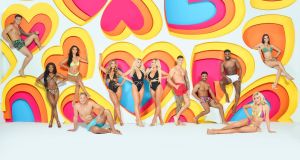 Watching Love Island is now like sitting through a school play in a mausoleum. Photograph: Joel Anderson/ITV/PA Wire

It’s been a busy week on Love Island (Virgin Media One). Jamie and Natalia have been voted off in a tense elimination episode. Paige and Finn have had a cheeky cuddle on an island. Jess and Ched have gone “exclusive”.

Amid all this excitement space has also been carved for a very brief tribute by comedian-narrator Iain Stirling to his late colleague Caroline Flack, who died by suicide at the weekend. It went out on Monday night and was over in less than five minutes. Had you tuned in late you would have missed it.

Love Island is clearly determined to push on from Flack’s tragic death. There were expectations in some quarters that the season might be cancelled outright with a week left. Instead it has proceeded with the slightly chilling air of business as usual.

Within minutes of Stirling’s Monday night remarks about his dear friend “Cazza” it was back to the task at hand of ogling toned singletons flirting by the pool. ITV wants us to set to one side our upset about Flack and lean into the ding-dong match-making.

The sense grows throughout the week that Love Island has now relocated to a parallel universe. One in which Flack isn’t all over the news. The host had stepped away from Love Island Winter after her arrest for assaulting her boyfriend. She was replaced by Irish presenter Laura Whitmore, who, following Flack’s death, used her BBC Radio 5 radio show to criticise the culture of online bullying.

Flack is the third person involved in Love Island to have taken their lives; contestants Sophie Gradon and Mike Thalassitis have also died this way. But clearly soul-searching is for others, not ITV.

Do you want me to you tell you how it all unfolded? That soon-to-be eliminated Jamie and Natalia snogged by the pool only for Natalia to later confess she didn’t find her new beau slick enough? About Siannise and Luke and their burgeoning romance? Or Paige and Finn and their disastrous date in a row boat.

Did it make your heart swell? No it didn’t.

There is a before and an after with Love Island and we are definitely, and forever, now in the “after”.

An air of unreality hangs around the villa all week as the islanders obliviously get on with the job of being foolishly in love. They have not been informed of Flack’s suicide. And yet those who tune in know that, with the presenter’s death, the context has changed utterly.

It’s like sitting through a school play in a mausoleum. It is airless and surreal and completely unwatchable.