We asked transition year students who visited The Irish Times this week to share their thoughts on Gay Byrne who died on Monday, aged 85. This is what they had to say... 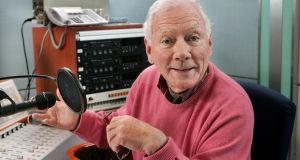 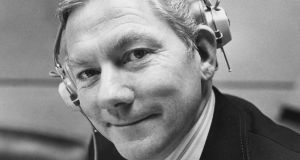 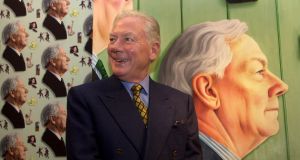 Gay Byrne and his portrait in the National Gallery of Ireland. Photograph: Cyril Byrne/The Irish Times 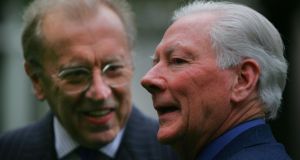 “If television is what moulded Irish society into its current state, Gay Byrne is undoubtedly the one who gave it shape. Even decades after his last broadcast as the host of the Late Late Show, Byrne’s impact can still be felt, even by the youth of Irish society. From waving a condom in front of a studio audience to discussing marriage and faith, his many controversial topics opened dialogues that would pull Ireland out of the dark ages and transform it into one of the most progressive and forward-thinking nations in the world.”

“There were two factors which allowed Byrne to be so influential. Firstly, his charm and humour which ranged from subtle innuendo on the Late Late to his radio show that was carried by his now iconic voice.

“Also, media limitations meant that if people wanted to watch the television during that particular slot of the week they would have to watch Gay Byrne and, more importantly, listen. In this, the age of hundreds of channels and dozens of media apps and outlets, it is unclear whether his like would survive the oversaturation. One thing is clear: Gay Byrne took a small nighttime talk show that was initially intended to be a temporary slot-filler and not only made it into a successful programme but built the foundations for it to be the longest running show of it’s kind.” - Ben Hunt

“Gay Byrne, Gaybo. A man who’s contribution to Irish television will never go un-noticed. It came as a shock to me, when just before 3pm on Monday I heard the news of Gay Byrne’s death after a long illness. To be fair, I never even knew of his illness. As a teenager growing up in the era of Netflix and Social Media, a man such as Gay Byrne would not be known by many my age which is understandable.

“Gaybo left an impression on not only on me but on the whole nation. If it wasn’t for his success on the Late Late, I may never have witnessed Caitlyn Jenner talk to Ryan Tubridy, the iconic performance of ‘When you were Sweet Sixteen’ by Imelda May and Finbar Furey may also never have happened.

“Gay Byrne is an Irish household name, just like Brendan Grace and the Dubliners were before. Whether he knew it or not, he changed Irish TV and left an impression on everyone - he’s set an example his successors ought to follow.

“One thing that everyone enjoyed was the Late Late Toy Show and this was all down to Gay himself. He brought families together in such a simple way. Today we stood outside the Mansion House with Conor Pope and interviewed people and asked them why they were there and what he meant to them. The most common answer was that he was a kind, intelligent and respectful man. Many spoke about how they grew up listening and watching him on the television and how it would always bring people together at the end of the day. We spoke to a lady who phoned into his radio programme to talk about migraine, how it affected her and how she hoped to set up a clinic for people who suffer with migraines. Gay stayed in contact with her and helped her set up one clinic. Today the lady has six clinics and is making a huge difference in Ireland. That is one example of the many great things Gay helped people achieve in his life-time. Gay Byrne truly was a legend and he will be kept in millions of people’s hearts and he will be missed dearly by the nation.” - Polly Moran

“From the days of RTÉ being the only available television channel, to the technological renaissance of the 1990’s, he was present, entertaining people as they grew up, and as they grew old. You cannot discuss the life of Gay Byrne without discussing the changes his life made. He was a figurehead for societal change. Any controversial shift in society would be discussed on the Late Late Show and Gay’s discussions with people involved would shed light on foreign topics to those watching and create a more open minded Irish population that would embrace change, and not deny an opinion without due debate.

“I believe the death of Gay Byrne marks the end of an era for entertainment, as streaming services like Netflix or Spotify are becoming more and more popular. I believe Irish society will never have a man so impactful again, simply because in the same way the Late Late Show made Irish families embrace change, we are embracing change in the media we consume.” - Joshua McGarry

“To past generations, Gay Byrne was the most dominant name associated with ‘The Late Late Show’ and although this younger generation recognises Ryan Tubridy more so than Gay Byrne, this does not erase Byrne’s contribution to Irish television.

“My parents grew up watching Byrne on RTÉ hence the immense sense of nostalgia at this time of his passing. His face and character had a sense of familiarity to older generations Gay Byrne signifies a time period in which there was one channel, a period from which we have evolved from. Nowadays there are so many sources of entertainment, there is a lot of choice. Bay Byrne is an icon of Irish television because he entertained so many people which proves true with the huge reaction to his passing. His death is such a big deal as it signifies the death of a single channel generation and the memories of sitting to watch Gay Byrne?

Although the erasure of these memories seems unlikely as Byrne will be remembered for his influence and contributions to Irish television and media and his impact on the lives of Irish people and childhood. - Lorna Farrelly