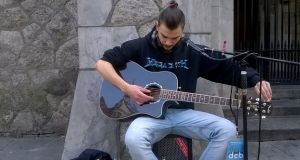 A glowing and exotic melody drew me around the corner of Suffolk Street to the front of St Andrew’s Church where Alessandro ‘Alex’ was serenading Molly Malone with his bright and balmy guitar tunes.

I instantly recognised the flowing harmonics of John Butler’s Ocean with Alex’s own personal twist, he also hammered out a few Ben Howard numbers with his guitar placed across his knees like a keyboard. Alex’s smile is warm and friendly as he explains that he’s been in Ireland about a year and a half since moving from his hometown of Rome, in which time he found a job and subsequently quit when he realised that he could make a living from busking.

He challenged himself to try living just from busking and finding gigs and he did. While on the street he plays with his acoustic guitar and amplifier, his Megadeth Hoodie betrays his true musical preferences. He told me that he grew up loving metal and electronic music but it was through practicality that he couldn’t bring his electric guitar and equipment from Italy so instead he bought an acoustic guitar and taught himself to play the music that he performs today.

In his case on the ground before him alongside a couple of euro coins is a copy of his album ZAR; Sounds of Mind. The album took 10 hours to record in a studio in Ireland and he tells me it is a  collection of instrumental songs from covers to his own compositions.

To read the rest of this article, please click here