'A university should never be a safe space'

Opinion: Former TCD student Jessica Jacques argues that Nigel Farage should be allowed to speak at a Hist event in Dublin next year. 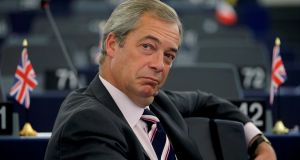 Nigel Farage should be given a platform to speak to the Hist in Trinity College. As the boundaries of free speech become increasingly blurred and as conservative viewpoints on open borders are constantly conflated as white supremacist or racist, universities must continue to exercise and support one of their intended functions, namely to be a place which encourages engagement with all sorts of ideas and viewpoints, however offensive they may be. A university should never be a safe space.

If the left had any real conviction behind their beliefs, they would welcome the opportunity to challenge Farage on his more questionable statements.

Critics have called him a white supremacist and accused him of expressing xenophobic and racist views. A white supremacist is “a person who believes that the white race is inherently superior to other races and that white people should have control over people of other races.”

There is no evidence of Farage being a white supremacist.

Indeed, he is a provocateur. He repeatedly speaks out against large influxes of migrants coming to the UK from less liberal and tolerant cultures. This does not mean he believes these people are inferior.

The whole point of free speech is not to protect the viewpoints you want to hear but to protect the speech you do not wish to hear. It is not an understatement to imagine that the pioneers of free speech would be turning in their graves if they could see the levels of political correctness and intolerance of diverse viewpoints in universities today, generally coming from the left.

When Madeleine Albright, the first female US Secretary of State spoke at the Hist she told the audience that she would drive around Washington listening to right-wing radio stations, often grasping her steering wheel in anger at the ideas she would hear. Her point was that it is necessary and useful exercise to engage with those you don’t agree with: know thy enemy.

Rosa Luxembourg wrote that, “Freedom is always and exclusively freedom for the one who thinks differently. Not because of any fanatical concept of “justice” but because all that is instructive, wholesome and purifying in political freedom depends on this essential characteristic, and its effectiveness vanishes when “freedom” becomes a special privilege.”

You can be pro-Europe and pro-open borders and enjoy listening to Farage. He is undoubtedly one of the most charismatic public speakers in the West today. His enthusiasm, passion, quick-wittedness and conviction are remarkable. His millions of views on Youtube are a testament to this.

I do not like what he says, but I love the way he says it. He has made a considerable contribution to public discourse.

When it comes to banning speakers, we appear to be following in the footsteps of American universities’ safe space culture. When conservative speaker Ben Shapiro spoke at Berkeley, $600,000 was spent on security. “Free speech is expensive” wrote Mike McPhate in the New York Times. A university spokesman said a similar amount was spent when Ann Coulter, a conservative author and commentator was invited to speak.

The event was later cancelled.

At Shapiro’s event, the authorities reported arresting 9 people, some accused of having banned weapons. At Trinity an event with the Israeli ambassador was cancelled following student protests.

It is rarely fruitful to make comparisons with the Nazi period: to do so trivialises the events of this horrific era. But let us not forget the various movements in history which banned books, political parties, journalists and commentators. No-platforming speakers is a demonstration of intolerance, which should not be tolerated.

With the advent of social media, online trolling and anonymity, it has become more difficult to defend free speech as an absolute. But if we accept free speech as a fundamental value, we have to take the good with the bad and support it uncategorically (to the point where it incites violence). This means the right to criticise Islam, the right to call for closed borders and caps on immigration and this means the right to call politicians nasty words. You may not like it, you may feel upset and offended by it, but if any words which offend are “hate speech” this is the beginning of a slippery slope into policing speech and consequently thought.

Giving Farage a platform is apparently “not a good look”. Free speech does not always look pretty but it fulfils a much more useful function: namely it allows us to expose and engage with diverse views and develops our critical thinking skills.

Nietzsche said, “That which does not kill us, makes us stronger.” If Farage speaks at the Hist, his words will not kill the listeners. If he encourages Trinity students to question their convictions and either reinforces them or makes them more sceptical of their own opinions, society will be stronger for this.