‘They couldn’t look past me as a woman’ 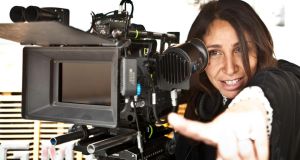 This is an interesting time to be Haifaa al-Mansour. As she prepares for the release of Mary Shelley, her second feature film, the Saudi director juggles questions about images of women driving for the first time in her home country. When histories are written of Saudi Arabia’s current social revolution, her name will be at the head of a chapter. Six years ago, with the rapturously received Wadjda, she delivered the nation’s first film by a woman director. There’s more to it than that. Wadjda was the first feature of any sort to emerge from Saudi Arabia. She’s a genuine pioneer.

“There is definitely a cultural revolution coming,” Mansour says. “I have been hired for the board to see over culture and film in Saudi Arabia. I don’t cover my hair. That says something. It is amazing to see how many young people are in the streets enjoying music and having fun. This has never happened before.”

The film’s success on the world stage – a Bafta nomination and excellent box-office returns for an independent feature – propelled her towards further opportunities. Later in the year we will see Mansour’s Nappily Ever After, an African-American comedy, on Netflix. Before that she offers us Elle Fanning in a sumptuous biopic of the woman who created Frankenstein. A coproduction by the Irish company Parallel Films, with assistance from what is now Screen Ireland, Mary Shelley was filmed in Luxembourg and the Irish capital.

“I really enjoyed my time in Ireland,” she says. “We filmed most of the exteriors in Dublin. I wish we could have stayed longer. But it was a coproduction, and we had to spend money in Luxembourg. We had Paki Smith, an amazing Irish production manager. He did an astonishing job of making it visually cohesive. Irish people are very supportive.”

We know Shelley wrote Frankenstein. We know she was the partner of Percy Bysshe Shelley. We probably know she was the daughter of the pioneering feminist Mary Wollstonecraft. Little else has been enshrined in legend. I wonder what Mansour most wanted to tell us about the author.

“Women should not just write about women,” she says. “Jane Austen was the star of that time, and she wrote about love and jealousy. She is an amazing writer. But it is also important to have women like Mary Shelley who write about things that are not seen as acceptable to women. That is why she is important. She says: ‘I am going to be where I want to be.’ We can rebel and we can still succeed.”

I remember my dad renting 'The Evil Dead'. He left us all in the room with the lights off and went to read the newspaper. We were traumatised

It’s hard to avoid the suspicion that Mansour is talking about herself. Raised in a small town as one of 12 children to the poet Abdul Rahman Mansour, she studied literature in Cairo and went on to do a master’s degree in film studies at Sydney University. Before all that she relied on the VCR for her film education.

“My dad would go to the video store and bring us back movies to watch,” she says, laughing. “They didn’t have ratings, and I remember my dad renting The Evil Dead. He left us all – 12 children, aged 11 to three – in the room with the lights off and went to read the newspaper. We were traumatised. We watched it right to the end, and we still talk about it to this day.”

After finishing her degree Mansour returned home and got a job at (what else in Saudi Arabia?) an oil company, but it soon became clear that, as a woman, she would never secure promotion over any man who “had a family”.

Mansour remains impressively stoic about the discrimination women then suffered. She doesn’t rail. She doesn’t whinge. She makes a point of explaining that she never took it personally. “There was nothing against me as a person. It was just that they couldn’t look past me as a woman,” she says.

She began making short films as “therapy” and, to her surprise, found that they were soon accepted into international film festivals. “I felt that I mattered. That gave me satisfaction. I exist. I have a place.”

Getting a feature film produced in Saudi was a significantly greater challenge. There was the issue of her gender. There was also the inconvenient business of the country not having any sort of film industry.

Redolent of Italian neorealism and the folk cinema of Iran, Wadjda told the story of a young girl who longs to own a green bicycle. Mansour didn’t make things easy for herself. She could have written a film that took place behind closed doors. Instead she insisted on shooting on the streets of Riyadh at a time when public interaction between men and women was frowned on.

“The country was segregated,” she says. “A lot of the time I was in the van. I had a monitor, and I was shouting at the [cinematographer]: ‘Make the shot wider. She needs to look up.’ It was hard not to be right there. But I think it was important to do that at that point.”

She must have been aware that she was making a historical artefact.

“Not really. I just wanted to make films, and I wasn’t consciously becoming the first Saudi film-maker,” she says. “I was just trying to make films. When I told people they got excited. People would say: ‘You’re brave!’ I would say more that I was crazy. I was trying to do something that I enjoy.”

Films like Wonder Woman – directed by a woman – dominating the box office is very important. They always say audiences only like to watch men. That’s not true

The film brought her a lot of attention. It won awards at the Venice film festival. She was drafted on to the Un Certain Regard jury at Cannes. Mansour had become the face of a movement. Inevitably there was talk of resistance back home. But the director has always been diplomatic when discussing the response from her compatriots. There is no sense that wants to be seen as a thorn in the side of an angry establishment.

“I try to maintain my voice as a liberal woman who talks about women’s rights,” she says. “I try to do it in a way that doesn’t offend people. It was the first film submitted to the Oscars by the Saudi authorities. It was the first ever film from Saudi Arabia to be nominated for a Bafta. It has brought a lot of national pride. There is a lot of respect there.”

Mansour now moves through an industry that is rigorously examining its attitudes to women. Mary Shelley is just the sort of project such conversations seek to encourage: the story of a prominent woman artist, written and directed by women.

There are countless adaptations of Frankenstein. But Mary Shelley herself has made more appearances than you might guess.

Bride of Frankenstein (1935) Elsa Lanchester, who later appears as bride to the creature, turns up in a prologue to josh with Percy Bysshe Shelley and Byron.

Gothic (1986) Natasha Richardson made her big-screen debut in Ken Russell’s characteristically unhinged treatment of the Swiss house party at which Frankenstein was conceived.

Haunted Summer (1988) Yet another treatment of that famous Swiss gathering. Alice Krige, later the Borg queen in Star Trek, is Shelley in Ivan Passer’s odd film.

Frankenstein Unbound (1990) Roger Corman’s barmy exploitation flick stars Bridget Fonda as a version of Shelley who actually encounters the inspiration for her novel.

Mary Shelley (2018) The most complete and sober biopic yet. The graceful Elle Fanning is Shelley. Watch out for Hugh O’Conor in a cameo as Samuel Taylor Coleridge.