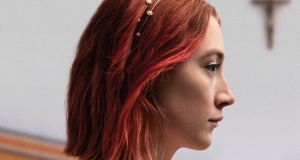 Saoirse Ronan is transcendent as a fraught teenager who is closer to her mother than their fuming rows would suggest, in Lady Bird

Don’t get in a state. You should know that we do this now. Be grateful that we were polite enough to wait until the end of June before naming our favourite films for the first half of 2018.

The last act of awards season often dominates such conversations, but only two Oscar nominees for best picture make it into our list. Guillermo del Toro’s The Shape of Water comes close, but, though it’s a lovely thing, we aren’t persuaded it’s among that director’s best work. Darkest Hour and Three Billboards Outside Ebbing, Missouri, also 2018 releases, aren’t even at the races.

We end up with an eclectic list. There are films from France, Britain, Russia, the USA and – up the Republic! – our own brave nation. Last year’s halfway list included Get Out. This year’s features another two intelligent horror films. Make of that what you will. Two of our films premiered at Cannes more than a year ago. It is now scarcely possible to make sense of release patterns. Good films come at all times from all directions.

So, in no particular order ...

Legrand’s study of a young boy forced to spend time with an abusive father following the family’s breakdown combines the grit of the Dardenne brothers with the tension of a mainstream thriller. Hard to watch for the right reasons. Voted best film at this year’s Audi Dublin International Film Festival.

Premiered at the last day of the 2017 Cannes Festival to genuine gasps. Joaquin Phoenix plays a private operative who devotes himself to rescuing sex slaves. Ramsay’s follow-up to We Need to Talk About Kevin combines raw emotion with powering, irresistible momentum. Great score by Jonny Greenwood. One for the ages.

Since its release, Aster’s debut feature – the one big breakout from Sundance film festival 2018 – has come to define a particular split between audiences and critics. Following a family as they deal with bereavement, the picture does, in many ways, play like a conventional horror flick, but it proved too off-beat for some viewers. That’s their loss. Toni Collette delivers one of the year’s best performances.

Just typing its name makes the world feel a little bit less trying. Saoirse Ronan is transcendent as a fraught teenager who is closer to her mother than their fuming rows would suggest. Captures a time and a place: Sacramento at the turn of the millennium. Addresses the sadness of family life. As “important” a film as any of its more overwrought competitors at the Oscars.

Berry’s follow-up to I Used to Live Here follows the template of many prison movies: fresh-faced new inmate gets drawn into darker mayhem. But, driven by Berry’s diligent research and a stunning lead performance from Dafhyd Flynn, the picture discovers much fresh ground. Moe Dunford is predictably strong as the prison heavy.

Lelio won the best foreign film Oscar with his intricate, fluid, funny study of a transgender woman coping with life after bereavement. Daniela Vega subtly conveys all sorts of inner torment in the central role as the picture teases out discontents about masculinity. Ends with an unexpectedly apt use of music by The Alan Parsons Project (no, really).

Wes Anderson got in some hot water from the cultural appropriation police with his animated tale of a war against dogs in a heightened version of contemporary Japan. If you can get past those political embarrassments, there is much fun to be had with hilarious anthropomorphic characterisation and smart voice work.

Daniel Day Lewis plays a fanatical artist – a dressmaker, to be precise – whose perfectionism makes life a quotidian nightmare for circling staff and lovers. After shooting the film, DDL announced his retirement. Makes you think. Doesn’t it? Anderson’s icy tale of romantic obsession gets under the hood of toxic masculinity. The lack of sex in such a sexy film feels almost high conceptual.

Nobody saw this coming. Krasinski’s second film as director won over critics and took a small fortune at the box office. Krasinski and Emily Blunt – married in real life – play a couple trying to survive in a world stalked by creatures that hunt by sound. The result is tense, ingenious and ultimately moving. Much credit must go to the young deaf actor Millicent Simmonds, brilliant as the couple’s daughter.

Let me say it. Zvyagintsev’s drama following an awful Moscow couple as they cope with the apparent abduction of their son might just be the acclaimed director’s best film. There is much here about the corruption at the heart of Russian society. The camera finds a rugged, frightening beauty in the decaying outskirts. But the film is remarkable mostly for the ruthlessness of its characterisation. Zvyagintsev is not afraid to say: “these are bad people”.

Bubbling under: Lean on Pete, The Square, I, Tonya, The Shape of Water, Beast, Coco, Leave no Trace, Western, Zama, Game Night.