If Les Bleus could win at such a canter, maybe there's something wrong with the race?

The streets of Paris came to a standstill as tens of thousands of fans celebrated France's World Cup final win over Croatia. Video: Reuters 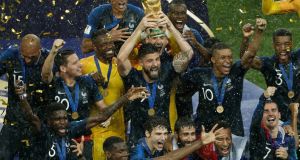 It was the highest scoring World Cup final for more than 50 years, which just goes to show that goals aren’t everything. France won, of course, and they fully deserved to win their second World Cup. They may be the only team ever to have won it without needing to get out of third gear.

As with all of France’s matches at this World Cup, the sense of anticlimax had built to overwhelming levels long before the final whistle. The match had been over since the 59th minute when Paul Pogba slammed in France’s third goal from the edge of the box. We’d had more than half an hour to get used to the idea of France as world champions.

Still, when the whistle went the French substitutes – stripped to their playing gear – raced onto the pitch as though celebrating a last-minute winner, while Emmanuel Macron cavorted in the VIP section, as befitted a “sports-mad president” (is there any other kind). France had just won the World Cup after all, and we all know what that feeling is supposed to look like.

The match had taken place under a weird rainless thunderstorm, the rumbles in the clouds from a foreboding sky. But it was not until the presentation, when Gianni Infantino and Vladimir Putin were accompanied onto the field by Macron and the Croatian president Kolinda Grabar-Kitarovic, that the skies finally opened and an epic cloudburst poured forth.

They were strong, they were disciplined, they were smart, and in Kylian Mbappé they are blessed with an amazing talent

A dark-suited flunky quickly produced a black umbrella to shelter the Russian president, but the French and Croatian ones were utterly soaked before enough umbrellas could be sourced. It felt like the politicians had got what they deserved for shamelessly inserting themselves into the trophy presentation.

Shelter of the tunnel

Their cluelessness about how these things are supposed to work was exposed at the end: having handed the French players their medals and passed over the World Cup trophy, the politicians immediately made their way off the presentation stand towards the shelter of the tunnel, only to be startled by the sudden roar the crowd gave to salute Hugo Lloris as he lifted the trophy. They turned around and applauded awkwardly on the wet grass for a few seconds, before bolting again for cover.

At least this little farce provided a bit of interest to the end of the story of France’s World Cup. Which might seem churlish: it’s not France’s fault that Argentina were a joke, or that Uruguay lost Cavani before they played them, or that Belgium saved their worst performance of the tournament for the semi-final.

France were the best team in Russia, of that there is no doubt. This was a side spearheaded by the goalless wonder Olivier Giroud that still comfortably outclassed the opposition in every game – except the final group match against Denmark which neither side needed (or tried) to win.

And yet you feel a squad as talented as this could and should have done even more.

The volunteers that direct fan movements outside grounds at the 2018 World Cup have a script that includes the lines: “Fans, please have a good time, and unforgettable emotions.” No doubt the success of France has been enjoyed back in France. They were strong, they were disciplined, they were smart, and in Kylian Mbappé they are blessed with an amazing talent – the most likely successor to the status of Ronaldo and Messi.

After dominating the first quarter-hour, they went behind in sickening fashion to France’s first attack

But if you’re not French the emotions they produced were much more in the forgettable than the unforgettable range. They are a careful, clever, cold-blooded side that play the percentages and avoid unnecessary showing off. They elicit grudging respect rather than admiration, astonishment and love.

The same could not be said about their opponents in Moscow. In the Luzhniki, with the Croatian fans cheering on their team so loudly that even the referees’ whistle could barely be heard above the roar, it was hard not to feel emotionally swayed Croatia’s way. Harder, even, than it was to believe they could really win this.

The success of this little country of 4.2 million people defies explanation. Their domestic football is a farrago of corruption and criminality, the fans of the national team have been at war with the FA for years, the structures that exist are mostly completely dysfunctional and the things that do work seem to have little basis in the structures. And yet here they were, with the impossible almost within their grasp.

After dominating the first quarter-hour, they went behind in sickening fashion to France’s first attack. Griezmann eagerly accepted the gift of a soft free kick from the referee to send in a ball that Mandzukic headed into his own net.

Croatia fought back and for a time it looked as though they had the measure of the French. N’Golo Kante was having a surprisingly poor game in midfield, and every time the Croats got the ball into the French penalty area there was an uncertainty that had not been evident in France’s previous matches. Ivan Perisic capitalised on just such a moment to slam in Croatia’s equalising goal.

The crucial moment of the game came when the referee decided to punish Perisic’s accidental handball by awarding a penalty to France after consulting the video replay. It was a moment that demonstrated that even with the benefit of video replays, referees will always make wrong calls.

The incident had happened so fast that none of the officials had even spotted that the ball had gone out of play off a Croatian player, never mind that it had struck Perisic on the hand. France got a free goal out of it, and Croatia, who’d had a day’s less rest and had played effectively an entire extra knock-out match with three half-hour periods of extra time, had to climb the mountain again. They went in at half-time leading 7-1 in shots and trailing 2-1 in goals.

A team as good as France doesn’t need this much luck. In the second half they finished off the tiring Croats with two superb counters, first Pogba finishing a move he had started with a brilliant pass to Mbappé, then Mbappé becoming the first teenager since Pele to score in the World Cup final, using Domagoj Vida as a screen to steer a precise 22-yard shot into the corner.

To complain that France were never quite tested to their limits at this World Cup is essentially to blame them for being too good for the competition. But that will be the regret about the 2018 World Cup, which often seemed as though it could be remembered as one of the best ever. That now seems unlikely. If football’s top competition can be won at a canter maybe there was something wrong with the race.