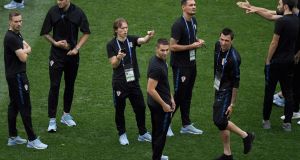 Croatia’s players walk on the pitch at the Luzhniki Stadium in Moscow ahead of the World Cup final against France. Photograph: Gabriel Bouys/AFP/Getty Images

World Cup finalists France and Croatia both named unchanged sides as they prepared to do battle for the biggest prize in football at the Luzhniki Stadium.

Les Bleus manager Didier Deschamps kept faith with Chelsea striker Olivier Giroud, who has proved a strong link man for Kylian Mbappé and Antoine Griezmann but has yet to score in the tournament.

Mbappé, at 19 years and 207 days, also had the honour of becoming the third youngest finalist ever after Pele and Giuseppe Bergomi.

Croatia have been taken to extra time in each of their three knockout fixtures but Zlatko Dalic resisted any temptation to freshen up his starting XI after edging England at the same ground in the semi-final.

1 Leinster get the opponents nobody wanted
2 Liverpool have a shot at genuine legacy season
3 Salah seals the deal as Liverpool see off a dogged Man United
4 Corofin combine total football with dark arts for three-in-a-row
5 St Michael’s conveyor belt showing no signs of slowing down
Real news has value SUBSCRIBE
Crossword Get access to over 6,000 interactive crosswords