Sonia O’Sullivan: A lesson in practice and patience on the golf course 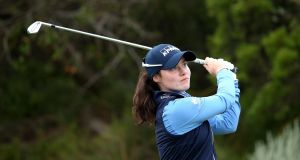 Leona Maguire: finished in a tie for fourth place and earned €48,000 at the ISPS Handa Victoria Open at 13h Beach Golf Club in Geelong, Australia. It was just her second start on the LPGA Tour. Photograph: Jack Thomas/Getty Images

A part of me will always look at a golf course and think there’s a nice place to go running but sometimes you have to practice what you preach.

If she can’t see it, she can’t be it. It’s the theme of the 20x20 women in sport campaign and even if I couldn’t quite see the 13th Beach Golf Links from where I live in Melbourne, I could certainly be at it.

I’d met Leona Maguire at a sports awards lunch in Dublin in December, and she’d mentioned the LPGA Tour was coming out here in February, for the ISPS Handa Victorian Open. The 13th Beach Golf Links, at Barwon Heads, is just over an hour down the coast so no excuse not to see it up close – not on TV or online but in person.

It was Saturday morning, I’d just finished the local 5km parkrun, the temperature was rising, so a trip to the coast felt like a nice way to spend the day anyway. I’d also been following both Leona and Stephanie Meadow on the LPGA App and was excited to see both had made the cut.

There would be another cut on day three, taking the competition down to 35. It was also being held in conjunction with the men’s tournament, offering equal prize money too, so plenty to play for on both days. I had no idea what to expect, so decided it was best to get down on day three and have a look around.

On arrival I was pleasantly surprised to find entry for the day was just AUS$10 - and children go free. I’d timed the trip to hopefully catch Leona about halfway through her 18 holes: the App came in handy as you could see the progression from hole to hole and I figured if I could catch the final nine holes it would give me a good idea of what it was like at a live golf tournament.

As Leona wasn’t heading out until 12:40, I had plenty of time to pack up, call into the market for some weekend supplies, grab a coffee, drop off Winnie the dog at the beach house in Jan Juc, then get across to 13th Beach and still catch the final nine holes.

When I first arrived I sat on the edge of the ninth green, expecting Leona to turn up as she was just through the eighth, only next up came three men, and as I was trying to match up the names and order of play I realised Leona had started out from Tee 10 and so would be out at the 18th hole. Just a little confusing.

As much as I enjoy reading maps, I’m not the best when it comes to directions, so it took a few attempts to find my bearings and set off in pursuit of Leona, who by now would be heading for the second tee. This was already proving a good day to accumulate steps, and I hadn’t even linked into a group yet.

Once I caught up it became a lot easier, just walk along, watch every shot and get a rest at every green. There were a few other Irish supporters who lived locally out on the course and we got chatting, and I was also pleasantly surprised at how close the spectators could be to the players.

Standing behind the tee box, looking down to the next green, you could also follow along straight down the fairway, once the players headed off. This was no stroll however, as Leona set a fair pace, all the while impressively controlling the ball in the tough, windy conditions. Practice helps make perfect.

There was a bigger crowd waiting around the clubhouse, who preferred to just sit in one spot, but I like the idea of being out following the play. And after over two hours of walking, sitting, waiting, lots of whispering, sometimes joining in the gentle appreciative clapping, getting gently battered by the gusty sandy and salty wind, I’d clocked up 32,000 steps for the day. All quite tiring, and I was only there for half the time.

I’ve never played a full round of 18 holes in my life, only ever made it to nine holes, so this was a bit like watching a marathon, and only knowing what a half marathon feels like. Playing over four straight days is clearly no easy test of endurance either.

What I also learned is that golf is also a game of great patience. The concentration and intensity is immense, and after day three I spoke to Leona and she was very happy to have got through the day so well, improving her position to Tied-11th. So the momentum was good heading into the final day.

After that Leona was also called for a drug test – surprisingly too – and so I had a chat with her caddie Gary Marshall, and when I asked about the weight of the bag he suggested I pick it up and try it on. It was pretty close to 20kg, it turns out, so no wonder they get dropped on the side of each green, especially on a hot windy day.

With both Leona and Stephanie not far off the lead, I knew I would be back again on Sunday for more live golf. Tee-off time was a bit earlier; 10:40 for Leona, Stephanie a bit later, so I figured I could catch Leona again for the final nine holes then go back and see how Stephanie was getting on. Now that I had my bearings too I could confidently read the map and look forward to registering another 30,000+ step day.

The wind was still blowing and causing some havoc on the course. It clearly took some concentration to go back out and face it again, the only good thing being it was a warm wind, and maybe a little less strong as there seemed to be more flies about when you got that break to sit on the edge of the green.

Leona finished with one of the best final rounds, just one shot short of the first place play-off, to finish tied-fourth, earning herself a tidy €48,000. Very impressive, by any standards, but especially as it was just her second start on the LPGA Tour, and she seemed to be playing with added intent after missing the cut in Florida.

Stephanie also finished well for a share of 20th, and with a total prize purse of AUS€1.1million, including €165,000 for the win, it can make for a very healthy payday. But miss the cut and you can also come away with nothing at all.

Next up for Leona is the Australian Open, set for Royal Adelaide starting on Thursday, the LPGA stops in Asia cancelled because of the coronavirus, but the lesson in practice and patience from both Leona and Stephanie already has me looking at the golf course that bit differently. And already looking forward to seeing plenty more of them.