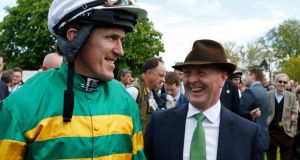 The cheering was so tumultuous as AP McCoy returned from his final race, his horse Box Office was probably thinking third is the new first, his ears pricking as the applause rang out, the acclaim putting a sprightly spring in his trot, all of which must have left the largely ignored victor Brother Tedd feeling mightily aggrieved. Indeed, it’s a wonder Box Office didn’t muscle his way in to the winner’s circle.

But that was the day that was in it. All eyes were on AP and his horsey partners, everyone else, understandably enough, an afterthought.

There’s no love lost between John McCririck and Channel Four, but even he was congratulating them for postponing an entire afternoon of Come Dine With Me repeats to bring us AP’s last hurrah.

And speaking of food. AP’s wife Chanelle told Channel Four of her relief that himself was retiring, one of the reasons being that he’d now actually be able to eat and no longer go to bed hungry.

“Congratulations AP, delighted for you,” said Jo, “I’ve never been allowed on a horse for fear of injuring it, but I’m so pleased for you because now you’ll be able to have as many dinners as you want – and I recommend 12 in an evening. Can you tell?”

But even the prospects of being able to have a proper nosh from this day forth didn’t appear to ease AP’s melancholy, nor indeed being presented with an antiquated tennis racket by Mick Fitzgerald so he’d have a hobby to pass the time.

This wasn’t positive thinking, it has to be said; somebody needs to buy him a copy of ‘How to Enjoy Your Retirement: Activities from A to Z’ quick and, as that final race neared, his mood seemed even more wistful, possibly not helped by being asked for the 10,724th time in a week “how do you feel?”.

He remained dignified through it all, though, even when the Sandown people appeared to have decided it was grand for him to be mobbed as he made his way about the place. You half feared even if he went to the loo there’d be 100 fans in there waiting for him, wearing AP face masks, backslapping him and asking for autographs while he tried to do his business.

He got hugs, too, from Liam Brady and Ian Wright, which was a special treat for the Gooner, and spent his afternoon carrying trophies back and forth from the podium to the changing rooms, so come that final race it was a wonder he’d any energy left to board Box Office.

But board him he did, finishing third, and even if you think the chief skill in jockeying is whipping the arse of a horse, you probably still gulped a bit as the fella bid adieu. Brother Tedd’s driver, Richard Johnson, was tearful too, which probably left Brother Tedd thinking he’d done something wrong by winning, Box Office giving him the two hooves for spoiling the day.

Box Office trainer Jonjo O’Neill was asked to pay tribute to AP. “The way he rode that, he’ll never ride for me again,” he said with a grin, the man deserving a trophy himself for that nugget.

“Go on run for me

Gone the summer gone the past and now it’s done

Not enough Kleenex in the universe.

1 Ken Early: Handball ‘crisis’ a timely distraction from the grim bigger picture
2 The Offload: Springbok heavyweights heading for Pro14
3 All Blacks facing a Christmas in quarantine
4 All in the Game: No sympathy from Bruno Fernandes
5 Malachy Clerkin: Nothing compares to rich tapestry of sound offered up by GAA match
Real news has value SUBSCRIBE
Here is your handy guide to sport on television this week