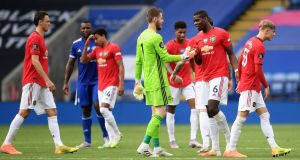 So that’s that. After a suspension, much debate over when it would restart and an eventual six-week flurry of matches, the Premier League came to a conclusion yesterday with Manchester United and Chelsea securing Champions League spots while Aston Villa stayed up, condemning Watford, Bournemouth and Norwich to the drop. For United it was a case of getting the job done thanks to a Bruno Fernandes penalty and a late Jesse Lingard goal at the King Power Stadium and afterwards manager Ole Gunnar Solskjær took the chance to hit out at some critics who he said spurred him and his team on. At the other end of the table, a draw for Aston Villa was enough to keep them up but, as Mary Hannigan writes, spare a thought for Roy Keane who was pretty disgusted to see the Villa players celebrating so wildly after the match.

Yesterday was also a day of farewell at Manchester City where David Silva played his last match for the club. The Spaniard has been hailed as one of the greatest Premier League players ever but Ken Early is having none of it. In his column this morning he writes that it’s patently absurd to rank Silva as one of the best to ever grace the league. Elsewhere there was joy for Juventus as they secured a ninth Serie A title in a row thanks to a 2-0 win over Sampdoria last night while, in the Championship, Swansea took the early advantage in their playoff semi-final against Brentford.