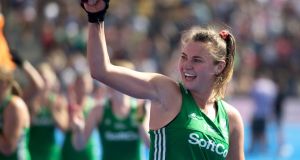 Deirdre Duke was on the scoresheet in Murcia. Photo: Sandra Mailer/Inpho

Ireland trailed early on but got back on terms when Zara Malseed – playing with a broken thumb – slapped in her third goal in three outings. The Ards woman has had a dream first trip away with the side and she gleefully slapped home from close range after Deirdre Duke’s overhead shot bounced her way.

Spain replied within a minute to restore the lead and they went in at half-time leading 4-2 despite Duke finishing off a classy move created by Malseed and Anna O’Flanagan.

It remained that way until the final quarter when Tice twice whipped in set-piece goals in the closing phases to earn the draw.

They were Ireland’s first goals from penalty corners with each of Ireland’s other efforts coming from play as they ended with two wins, two draws and a loss from the games, a strong return against the world and European bronze medalists.

This was the Green Army’s first series against international opposition in almost a year with coach Sean Dancer thrilled to have the chance to get on the turf after three lengthy training blocks before Christmas.

What happens next, though, remains to be confirmed. Dancer is keen for the side to use Sport Northern Ireland’s heat chambers as much as possible in February before getting a humidity-based camp in March.

Tokyo was initially hoped to be the venue for the latter but the current state of emergency there means nothing has been formally booked.