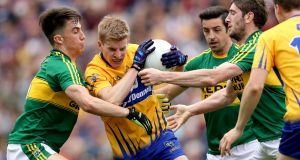 A warning should flash up on the screen prior to a programme to warn those of a nervous disposition not to be alarmed, that television sports punditry trades in superlatives and modest, measured pronouncements do not apply. It’s all about extremes and that particularly applies to tone, of voice that is, and content.

Having been present in Limerick’s Gaelic Grounds in 1992, this column had more than a passing interest in how RTÉ’s Gaelic football soothsayers, Colm O’Rourke, Ciaran Whelan and Joe Brolly, would preview the All-Ireland football quarter-final between Kerry and Clare.

Back then, Clare shocked Kerry to win the Munster final, prompting one commentator to famously observe, “there won’t be a cow milked in Co Clare for a week.” Those cows have crossed a few borders since then.

A personal recollection from that day is opening the door to a dressing-room at the end of a long corridor to find Kerry icon Jack O’Shea, sitting alone with his two young children. Everyone else had gone.

It presented a powerful image, shards of sunlight creeping through tiny windows, framing a father and two children. Jack O’Shea the footballer was no more; he retired that day.

The RTÉpanel were honour bound to talk up Clare’s prospects at Croke Park, indecent almost in their haste to gloss over the earlier meeting of the protagonists in the Munster championship when Kerry romped to a 12-point victory.

The panel had taken their happy pills.

It bordered on a eulogy, certainly in Brolly’s case as he heralded the work of the management team led by Colm Collins and the fact that the Banner had won the Division Three title playing a lovely brand of football.

Brolly and O’Rourke tried to avoid being patronising but failed at times. Whelan spoke with the tone of a concerned parent, fearful that Clare might find their surroundings a bit intimidating now they were in with the big boys again.

The dynamic within the panel rarely changes, three terriers, one chew-toy. Brolly feels he must be heard and has no qualms about talking over someone, nor interrupting, being condescending or disparaging. He is the keeper of all GAA wisdom.

Clare took the panel’s benevolence and threw it away carelessly, much like the ball in the opening 35 minutes. They didn’t play that foot passing, direct game and instead looked like someone had forgotten to tell them that the warm-up was over and the game had started. Crisscrossing by rote, overplaying the ball, playing each other into trouble, not taking responsibility for shooting and lacklustre defending were their more conspicuous issues.

The mood in the studio had changed appreciably by the interval. It was funereal and O’Rourke was the chief pallbearer. “There would be more atmosphere at the blessing of the graves,” he intoned. “The game is a dead duck, over.

“I am very disappointed in Clare. They went away from their kicking game and haven’t really performed. It’s a poor game and Kerry are not learning much.”

Brolly came out with a doozy, describing Kerry as “absent-minded factory workers” on a production line. Clare re-emerged in the second half and offered a better representation of their ability but it was never going to suffice in terms of the outcome.

Kerry vacillated between bursts of ingenuity and bored distraction.

The 11-point margin was one better than Clare had managed in losing the previous match. The panel seemed a little more mollified at the final whistle, having had time to realise that they shouldn’t take personally the seemingly ungracious manner in which Clare failed to live up to their billing.

Michael Lyster said he didn’t want to patronise Clare but eventually did a little and no one else seemed reluctant to avoid that trap, a time for platitudes and consolatory tones: nothing much to see here and definitely time to move on.