TV sports packages: who has what and how much do they cost? 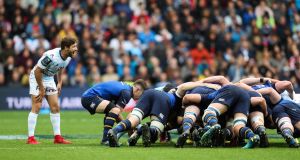 Sky Sports, BT Sport, Premier Sports, Virgin Media Sport, Eir Sport - it's all a bit of a minefield when it comes to sports broadcasting rights and what pay-TV channels have what. Sky's new deal to become the official distrubutors of BT Sport and Premier Sports in Ireland means customers can get all three channels on one subscription so here is a breakdown of where you will need to go to watch your favourite sport.

€20 for the first six months, €40 thereafter. Sky Sports can also now be included in a new Virgin package which also includes broadband and Virgin Media Sports (detailed below) for €55 per month for the first 12 months.

Soccer: Sky Sports will show 128 Premier League games this season on Friday nights, Saturday evenings, Sundays and Monday nights. Sky Sports also has 138 live Football League matches including all of the playoffs. On the international stage Sky Sports show every qualifier, friendly and Nations League game of Ireland, Scotland, Wales and Northern Ireland as well as every other Nations League game.

Rugby: Sky Sports will show all summer and November internationals of Ireland, England and Scotland. They will also 55 Top 14 matches and the Rugby Championship between Argentina, Australia, New Zealand and South Africa.

Golf: Sky Sports essentially have full rights to all professional golf to be shown in the UK and Ireland. Every men’s Major, women’s Major, European Tour event, PGA Tour event and the Ryder Cup are shown on Sky. They also carry coverage of the Ladies European Tour and the LPGA Tour.

Motorsport: Sky Sports have every Formula One race live until 2024.

American Football: Sky Sports will show every regular season game, every playoff and the Super Bowl for the upcoming season.

Basketball: Sky Sports will show live NBA and WNBA until 2022.

Soccer: From the start if this season BT Sport will show 52 live Premier League matches. Weekend coverage will move from Saturday evenings to Saturday lunchtime. BT Sport has live coverage of all Champions Leagues and Europa League games and has the rights to show 30 matches per season in the Scottish Premier League. It is also the only pace to watch German Bundesliga and French Ligue 1 football.

Rugby: BT Sport is the official broadcast partner of the Champions and Challenge cups and broadcast up to 134 matches per season. Their current deal with Premiership Rugby in England runs until 2021 and allows them to cover up to 80 matches.

WWE: From January of next year BT Sport will become the “home of WWE” with pay-per-views airing on BT Sport Box Office and other programmes on BT Sport 1.

Included in Sky's Sports Extra package, pricing of which is detailed above under BT Sport.

Soccer: Premier Sports will show 53 Premier League games during the 2019/20 season including 20 exclusive 3pm kick-offs which will be broadcast in Ireland on Premier but in the UK on Amazon Prime. Premier Sports also show Serie A, Eredivisie and Scottish FA and League Cups.

Rugby: Virgin Media Sport will show every Six Nations match live until 2021 and the station also carries every match live on their free-to-air channel. They also show nine live matches per season from the Heineken Champions Cup free-to-air.

Racing: Virgin Media Sport show the Cheltenham Festival, the Epsom Derby and Aintree Grand National as well as other meetings.

Rugby: Eir Sport is the only channel in Ireland that will broadcast all 48 Rugby World Cup matches live later this year. Eir Sport also have the rights to all Pro14 games.

Golf: Eir Sport will show all four days of the US Masters.