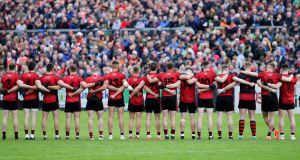 Down could find themselves without any opportunity to play the top teams and to learn and improve as they go. How does that help Down? Photograph: Philip Magowan/Inpho

The GAA shares with the rap communities of America a genius for gifting the world with original words and phrases which then pass into the everyday.

Every year gives us a new word or phrase which Gaels coin through intense repetition until they become unavoidable and, like a terrible pop song, unforgettable.

A few summers ago, “sledging” was the word on all lips. When the debate over opening Croke Park to foreign games reached fever pitch, you couldn’t go near the radio or television for fear of some apoplectic Gael lecturing you about “the thin edge of the wedge”.

Around the same time, GAA conversations were filled with shadowy and sinister references to “backwoodsmen”. Visitors to these shores who happened to watch a championship match on television must have studied the screen for any sign of the mysterious and invisible “blanket” that everyone was yapping on about.

In the winter months, the GAA gives itself to long and fetishistic conversations about “fixing the calendar” as though it had become the association’s sovereign duty to put a bit of manners on Time itself. And right now, the GAA buzzwords and the only ones worth talking about are “Tier Two”.

It’s not, admittedly, the most glamorous phrase to ever find itself on the GAA lexicon. When you hear “Tier Two” you are apt to think not of the cut and thrust of a riveting championship football competition but of those staggered wedding cakes of the 1970s, complete with tiny marzipan newlyweds standing in uniform, melting in the warmth. “Tier Two” sounds like a phrase nicked from the pages of a brochure for a budget cruise with delusions of grandeur or a mid-range package for a corporate wellness weekend.

You may have absolutely no interest in the GAA and have no idea what “Tier Two” is about but once you hear the phrase – and hear it you shall – you will instantly intuit that above it must be floating an alternative “Tier One” and understand it to be a sleeker and slightly more desirable version of this second-level tier over which all Gaels are currently obsessing. And you’d be right.

Like almost all ideas and motions put forward by the GAA, the thinking behind the Tier Two football championship is well-meaning and benign. But it is also muddled.

Over the past week, the association president John Horan has journeyed deep to the heart of the interior (Scotstown), much like Willie Loman, trying to sell the vision behind an idea in which the 16 lower ranked football All-Ireland football counties will contest a separate competition among themselves, with the top 16 taking part in a more elite version of the Sam Maguire.

In fairness to Mr Horan, it is not the easiest sales pitch to make, which is possibly why he invited counties to “get real” about what the future holds a few days back.

The association have handed him such a loose and vague set of proposals that the talk was not so much an exercise in transparency as a demonstration in opaqueness. It’s hard not to conclude that someone in the GAA didn’t just dash into the sixth class of a nearby primary school and hold a competition to see who could come up with the best idea and then run with that.

There are a lot of ifs, quite a few buts and way too many maybes. The first proposal sensibly retains the provincial championships, reducing the qualifier rounds to two and ‘open’ only to teams from that year’s Division One and Two league tables. The lower-placed 16 teams (as defined by national football league positions at the start – or maybe the end! – of the season) would play each other in a straight knockout competition. The winners would get back into the real All-Ireland the following year.

And the competition might run along a geographical basis, with southern and northern ‘conferences’ to cut down on petrol costs and maybe do a bit for the climate. No matter what way you square all of that, it makes it look as if, for instance, Waterford and Wexford can look forward to playing each other – forever.

The alternative suggestion –bearing the extravagant title of “Proposal B” – is a bit more complex and suggests “an initial round of games which creates a winners’ group and a losers’ group and so offers beaten counties a way of playing their way back into contention”.

Monaghan transformed themselves from a Division Four side to Ulster powerhouse

Is that not the stuff of dreams? What young footballer, as he practices in the dreamland of his back garden, won’t fantasise of the day when he might star on the team that plays its way back into contention despite finding itself in the losers’ group? Who’d want to play for Dublin or Kerry when you can be part of a scene like that?

No, there’s nothing about the presentation of this “Tier Two” future – which, staggeringly, may be up and running as early as next summer – to suggest that it will better the lifestyle or ambitions of those counties destined to feature in it.

For a big county like Cork, who slipped into Division Three this year, then the relatively straightforward task of qualifying for a Munster final means they will usually have an achievable means of returning to the top tier.

But what of a county like Down, who contested an All-Ireland final as recently as 2010? They have just missed out on promotion to Division Two of the league on score difference. Getting to an Ulster final is never as easy thing. Therefore, they could find themselves locked out, possibly for many years, from any opportunity to play the top teams and to learn and improve as they go. How does that help Down?

Many of the slightly smaller counties could similarly strive and strive to get out of this second tier without ever getting anywhere.

And what, in any event, is the prize? It’s the promise that if everything goes really well and they can get into the top two divisions of the league, reach a provincial final or win this second tier championship, they will find themselves eligible to contest the Sam Maguire – something that all counties have regarded as an automatic right throughout the history of the association.

The promise of an All Star tour and a promotional campaign is good in theory but generating the momentum to make this an alternative competition – one that can become, over time, just as meaningful and as intriguing as the Sam Maguire race, is the critical thing.

If it is to work, it will have to absorb more of the GAA’s energy and time and interest than the actual Sam Maguire championship, which will take care of itself. Will that happen?

Monaghan transformed themselves from a Division Four side to Ulster powerhouse and All-Ireland contender over the past decade under the exceptional guidance of Malachy O’Rourke.

Ask anyone involved in that squad and they will say that key to their improvement was playing against the best teams as often as they could. This new championship will effectively section off half the Gaelic football counties in Ireland to play in a competition that is by definition less prestigious and secondary and, as the theatre people say, off Broadway.

The principle of providing an alternative competition for those counties not strong enough to come close to winning the Sam Maguire is well and good. But the current line of thought feels too stark right now; too segregated and too rushed.

If there is to be a clear line drawn between the top and bottom 16 All-Ireland teams, then it is vital those in the second tier are not made to feel as if they have been relegated to second class.

1 Jim McGuinness: There is a way to save championship and make it competitive
2 Waterford turn Kilkenny upside down and inside out
3 Waterford’s frenzied waves of attacks too much for Kilkenny
4 Sordid murder of hurling brothers still resonates in south Galway
5 Ireland’s work-ons: Four things Andy Farrell needs to address
Real news has value SUBSCRIBE
Here is your handy guide to sport on television this week