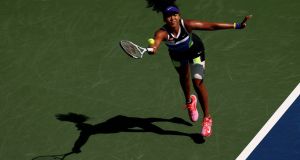 Former champion Naomi Osaka survived a third-round scare before grinding out a 6-3, 6-7, 6-2 victory over Ukrainian teenager Marta Kostyuk to reach the last 16 of the US Open.

The Japanese fourth seed looked out of sorts in the second set tiebreaker but regrouped to secure the victory in the deciding set after two hours and 33 minutes against an 18-year-old who was making her US Open main draw debut.

Osaka, whose left leg was heavily taped after suffering a hamstring injury that forced her to withdraw from the final of a tune-up event last week, wasted little time in the decider as she went up a double break before serving out the match at love.

Angelique Kerber is also through to the last 16 following a 6-3, 6-4 victory over 20-year-old American Ann Li. Kerber, a three-times Grand Slam champion who won the title at Flushing Meadows in 2016, converted four break points while Li - who is ranked 128 in the world - was let down by 28 unforced errors.

Li did however give a good account of herself, taking risks with some powerful forehand winners that caught the 17th seed Kerber off guard, but the 32-year-old German dictated play on the crucial points and was broken only once in the contest.

And Croatian eighth seed Petra Martic survived another sloppy display to see off Grand Slam newcomer Varvara Gracheva 6-3 6-3. Martic, who struggled through an error-riddled match against Kateryna Bondarenko in the second round, was again often her own worst enemy, allowing her 20-year-old Russian opponent to stay in the contest.

The match got off to a ragged start with three straight breaks before Martic managed to hold serve and grab a 3-1 lead. While Gracheva continued to pile up the errors, Martic began to settle into the match, holding her serve and breaking the Russian a fourth time to take the opening set.

However, it was more of the same in the second with the pair trading breaks before Martic took control, moving into a 4-1 lead and holding on for an uneven win.

After victories over two players outside the top 100, Martic will have to clean up her play with Grand Slam champions Osaka, Kerber and Petra Kvitova lurking on her side of the draw.

1 Gordon D’Arcy: the next fear for Irish rugby is England in Twickenham
2 Seán Moran: Fallout from Tyrone final celebrations will concern GAA
3 Solskjaer says Mason Greenwood ‘needs to learn how to head a ball’
4 Pro14 teams need private planes to keep show on the road
5 How Dundalk’s opponents Sheriff started on wrong side of the law
Real news has value SUBSCRIBE

Blow for Australian rugby union as Qantas end sponsorship 10:35
Nairo Quintana says he has nothing to hide amid doping investigation 09:25
Jamal Murray to the fore as Nuggets hold off Lakers comeback 09:02
Solskjaer says Mason Greenwood ‘needs to learn how to head a ball’ 08:44
David Moyes discovered positive test an hour after arriving at London Stadium 07:30
Here is your handy guide to sport on television this week