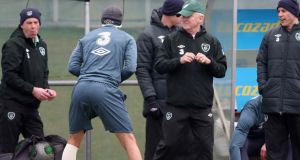 Giovanni Trapattoni ’s birthday celebration in Malahide yesterday was an almost intimate affair with just 13 of his players and one member of his management team on hand to join in the singing as a cake was presented to the now 74-year-old Italian.

Marco Tardelli and Alan Kelly were obliged to delay their arrival due to illness while many of the players were still busy with the clubs. Kevin Doyle ’s absence, though, was at the manager’s behest with the 29- year-old excluded from the official squad for a competitive game for the first time when fit since Trapattoni took charge of the selection process almost five years ago.

The Wexfordman, as it happens, got his first goal in 16 games for Wolves on Saturday but by then the decision on who would travel to Sweden on Wednesday had been made with Andy Keogh, who hadn’t actually made the initial squad of 29, and Conor Sammon both set to be on the plane while the man who saved the side’s (and manager’s) bacon in Astana in September will be left at home to mull over quite how the last year or so has gone so spectacularly pear shaped.

Stand-by list
“I think you have all seen what has happened,” explained Trapattoni when asked about his decision to consign the striker to the stand-by list yesterday. “He was not in his team and then he could have gone to another club but it didn’t happen. It hasn’t been a particularly happy time for Kevin in terms of what he’s been through.”

He has a point but the text message he apparently sent to convey the latest bout of bad news probably won’t have done much to cheer the player up.

Sammon will, first and foremost, provide an additional option in Stockholm if, explained Trapattoni (to the likely consternation of his critics) Ireland decide to take a more direct route to the Swedish goal while Keogh is seen as providing cover for the wide positions after the loss of Aiden McGeady who, along with Paul McShane, withdrew from the squad over the weekend because of injury.

Talk of McGeady’s withdrawal inevitably prompted questions about Wes Hoolahan, who scored at Sunderland yesterday, but the former Juventus boss dismissed any notion that the Dubliner might finally start a qualifying game for his country this week.

“Hoolahan needs to play in his position; he plays behind the striker, not on the left or the right. And we cannot change (the system) away to Sweden . . . it’s a very important game although we can change during it, depending on what happens.”

Instead, the manager will this morning start to assess whether Shane Long is, after a couple of weeks on the sidelines and a late appearance from the bench on Saturday, fit enough to partner Robbie Keane up front and which of his remaining candidates to play out wide – not just Keogh, Robbie Brady and James McClean, of course, but also Jon Walters and Simon Cox – can be trusted to do what is required of them in what might quickly turn into a rearguard action.

If fit for the task then Long appears to be the preferred choice up front with Walters possibly getting a start on the right although things might change significantly over the course of the next few days.

In defence, Trapattoni is perhaps somewhat better fixed than he might have anticipated with Marc Wilson, Seamus Coleman and Sean St Ledger all back in their respective clubs' first teams in recent weeks while John O’Shea, Ciaran Clark and Darren O’Dea are also available. Stephen Ward , like his Wolves team-mate, is another recent regular to be relegated to stand-by list, while Richard Dunne has, in the end, come nowhere close really to making a game in which his absence may yet prove a significant factor.

A dozen leagues
The big Dubliner would have been seen as Ireland's best chance of containing Zlatan Ibrahimovic in the event that the PSG striker is on form this Friday.

Trapattoni insists that there is a good deal more to the Swedish side than the 31- year-old star with the Italian pointing to the number that play in the German and English top flights although in truth the squad named by Erik Hamren contains quite a mix with almost a dozen leagues, some better than others, represented.

“They will have 11 players on the pitch and we must prepare to face them all,” says Trapattoni, “but Ibrahimovic could emerge as the most influential player and if he does it is important that I am in a position to correct the situation.”

If he does, that, of course, might be easier said than done.