Substitute seals brilliant victory for Antonio Conte’s side in Spain 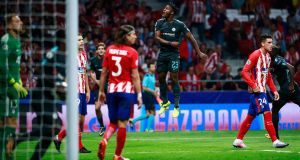 “This is the right moment to understand where we are,” Antonio Conte had said on the eve of this game, and the answer he received delighted him. Time was up, the clock heading past 93 minutes, when Chelsea produced a wonderful move to clinch a dramatic, and deserved, victory with the last kick of the game. At the end, Conte saluted the fans, fists clenched. He might have reflected that it should not have taken this long to find a way through, but they got there in the end and when the goal came it was gorgeous.

Marcos Alonso, N’Golo Kanté, Tiémoué Bakayoko, and Alonso again made it, the passing crisp and first time in and around the Atlético area, until the net was at their mercy. The man who scored it was Michy Batshuayi. He had only come on minutes before, along with Willian. The change had been a surprise, but it worked; the victory was not.

Chelsea are top of their group but more importantly, they impressed against a side who have reached two finals in four years – one that Conte had warned them about. There will be optimism too, particularly with a first start together for Eden Hazard and Álvaro Morata, who look like forming an extremely promising partnership.

The goal came from their 20th shot and while they had fallen behind to an Antoine Griezmann penalty, underlining Conte’s waning about teams like this, Hazard and Morata had made an equaliser. And now they had got the winner.

Chelsea began with a midfield three; at its base was Bakayoko, with Kanté and Cesc Fàbregas in narrow positions alongside to the right and left respectively. Kanté, on the front foot, went looking for the ball high. Width came, as ever, from Victor Moses and Alonso running from deep. Moses attacked Filipe Luís and twice César Azpilicueta sent long diagonals to Alonso on the other side. The early stages, though, were more about Morata and Hazard who played around the No 9, occupying the space between Atlético’s back four and their midfield four.

Not just occupying that space, in fact; enjoying it. This was only Hazard’s second start of the season and the enthusiasm was clear. Quick, willing to run at opponents, his position never fixed and his feet fast, he concerned Diego Simeone sufficiently for him to make a shift, drawing Koke inside to fill the gap and support Thomas Partey and Saúl Ñíguez. Morata, too, was proving difficult to contain, receiving with his back to goal, opening the pitch out or heading in behind the back four.

The chances were Chelsea’s, most of the control was too. Morata, Hazard and Morata again had all taken shots inside seven minutes. By the 25th, the attempts on goal count read: 1-6. The last of those had seen Morata behind Diego Godín; his header was tipped over by Jan Oblak. A moment later Kanté found Hazard, who snatched at his shot from the edge of the area, and then Morata almost robbed the ball close to the home goal.

Atlético were under pressure but they did emerge to create an opportunity on the right, Gary Cahill alert to Griezmann’s run as Juanfran’s delivery sought the Frenchman. Then, with two sharp, incisive passes Atlético found their way through, the pitch opening before them and leading them to the opening goal. Filipe Luís found Saúl who played it towards Yannick Carrasco. He exchanged passes with Ángel Correa. The shot was blocked for a corner, which Koke curled in towards the near post. As Thibault Courtois scrambled to push it away, Lucas Hernández tumbled, lying on his belly, arms in the air.

The referee reached for a yellow card for David Luiz, which could only mean one thing, particularly as the defender did not protest. Most people in this stadium had not seen what happened; Cuneyt Cakir had. David Luiz had grabbed at Hernández’s shirt; if that was imprudent, not letting go sooner was worse, sending the Atlético player spinning to the ground. From the penalty spot, Griezmann gave Atlético the lead.

Chelsea could barely believe it, yet if that infuriated them they were relieved to avoid a swift second. Koke’s shot was saved by Courtois; Saúl, following up, the clearest chance of the half falling at his feet, shot wide.

The way the equaliser arrived on 59 minutes was fitting: Hazard made it with a wonderful in-swinging ball from the left and Morata, who was in Atlético’s system until the age of 15, and was whistled for his Real Madrid past, turned the header past Oblak. Off he set to the touchline, where he embraced Conte and his team-mates. The rest piled on; they deserved this. They should have added to it, too, when Morata and Hazard – them again – scrambled the ball into the path Fàbregas. Stretching, from six yards, the ball skewed wide. Hazard lifted Fàbregas from the turf, his head in his hands.

Chelsea sought the second, Hazard seeking Kanté and then setting Morata free, clipping the ball up the left channel from deep inside his half. Morata and Hernández set off on a foot race, side by side. The Chelsea striker held off his man and reached the area. Faced by Oblak, he nudged it past him and just past the post.

With 10 minutes remaining and perhaps with an eye on Manchester City at the weekend, Conte removed the men who had most damaged Atlético: Hazard departed and so did Morata, whistled as he walked. Their work here was done. Willian and Batshuayi came on. They still had work to do.