Sutton forced to field defender in goal after pasty-eating episode 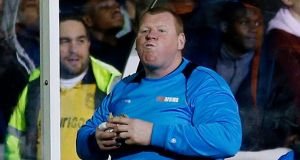 Sutton had to put a defender in goal when number one Ross Worner picked up an injury against Torquay as Wayne Shaw’s exit meant they had no substitute keeper on the bench.

United’s reserve goalkeeper and coach Shaw resigned amid a betting probe after the 46-year-old was seen eating a pasty on the bench during the second half of the televised FA Cup fifth-round defeat by Arsenal at Gander Green Lane on Monday night.

Shaw was shown on television tucking into the snack towards the end of the 2-0 loss, before admitting after the game he was aware that a bookmaker was offering odds on him to do so.

Sun Bets had offered a price of 8-1 on Shaw eating a pie ”live on air” during the match, but the player denied that he or any of his team-mates had placed a bet. He said some friends and fans may have placed wagers.

Following the tie, Sun Bets tweeted that they had paid out a ”five-figure sum” on a bet that 46-year-old Shaw would be shown eating a pie.

The Football Association and the Gambling Commission announced on Tuesday they would carry out independent investigations.

In the wake of the controversy, Shaw agreed to resign from the club, with his departure confirmed by manager Paul Doswell on Tuesday afternoon.

Doswell was not able to name a specialist replacement for the ”roly-poly goalie’ among the substitutes for Saturday’s Vanarama National League away match at Plainmoor.

Worner was injured as he tried to save a long-range shot from Luke Young in the 14th minute, which bounced into the net.

Simon Downer had to take over in goal and Frenchman Bedsente Gomis was sent on.

Sutton equalised after 30 minutes when Roarie Deacon, whose 25-yard effort rattled the crossbar against Arsenal, fired the ball in off the post from the edge of the Torquay penalty area to go into half-time level at 1-1.