New season arrives with a bang as Dundalk snatch victory 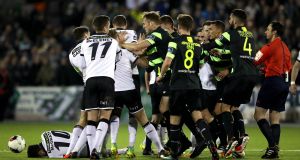 Both sets of players clash off the ball during Dundalk’s win over Shamrock Rovers at Oriel Park. Photo: Ryan Byrne/Inpho

Dundalk made a solid start to their latest title defence with goals from Robbie Benson and Ciaran Kilduff enough to give them the points against visitors whose hopes of making a big opening night statement came to nothing.

Rovers might have led from early on with Darren Meenan passing up a clearcut opportunity to capitalise on a bad mistake by Paddy Barrett against his old club but neither side could find much by way of rhythm through the opening stages as they both seemed to struggle to get to grips with the newly laid pitch at Oriel.

But after the locals had taken the lead thanks to a close range effort by Benson after good work by Michael Duffy, Stephen Kenny’s side started to get on top of things and it was no great surprise when, seven minutes into the second half, they doubled their lead thanks to a Kilduff header.

The two moves that led to the goals had both started with mistakes by the visitors and Stephen Bradley looked to change things with the introduction of Ronan Finn, Graham Burke and Sean Boyd. All made an impact with Finn settling things in the Rovers midfield while Burke and Boyd quickly combined for a goal that gave the visitors hope.

However, within minutes of seeing his shot loop over Gabriel Sava after deflecting off Barrett, Burke was dismissed for a reckless challenge on Jamie McGrath who had already been on the ground.

The crowd of nearly 5,000 thought that would be it for the visitors but the locals had a close call to come with David McAllister hitting the top of the crossbar with the last kick of the game.

Bradley admitted afterwards that his team has some to go before they can match the league’s best sides on nights like this. “It wasn’t going to happen overnight,” he said. “We knew that but we looked like we had 12 men at the end when we actually had 10 and we never stopped looking to bring the game to Dundalk. I don’t think there are too many sides that will come to Oriel Park and do that this season.

“In the end I thought we could have had another goal, we could drawn or won the game but obviously we lost it and that’s disappointing. We’ll go away and look at where we can improve on but we will be better, we know that.”

Dundalk skipper Stephen O’Donnell said he was just pleased to have taken the points. “It was a scrappy game,” he said, “but it was difficult because there had been so much talk beforehand about what it was going to be like with it being the first match of the season.

“I think both teams will feel that they can do better than that but from our point of view, we’d certainly have taken a scrappy game and a 2-1 win beforehand. When you concede with 10 minutes to go the ending is always going to be a bit nervy but we held on and saw it out.

“That’s been an important thing for us over the last few years, still winning games even when we weren’t at our best and so we’ll take this and move on to Sligo next week.”