Getting rid of Claudio Ranieri now is hardly madness 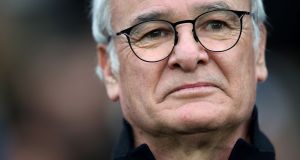 Claudio Ranieri: the manager has been unable to clear heads, reset the dials, engender enough fear and competitive desperation to reboot the machine. Photograph: Nick Potts/PA

Like all the best fairytales, Leicester City’s title story came to an end on Thursday night with a bracing little touch of cruelty. This is usually the way of these things: poisoned apples, hungry wolves, the doomed gingerbread house. Or, as in this case, someone getting the chop.

And so farewell then, Claudio Ranieri.

We’ll always have Leicester city centre on a muggy night in May. We’ll always have Robert Huth leaping above the floodlights to score at Spurs. Not to mention those oddly foggy memories of Riyad Mahrez sending Joe Hart and Martin Demichelis halfway to the Manchester velodrome with an insolent little swivel en route to a goal and a victory that gave the title pursuit an air of unstoppable ascent.

We’ll always have the memory of those press conferences where you pretended, shrewdly, to be a bumbling, cartoon Italian uncle from a processed tomato sauce advert, thereby giving everyone a laugh and avoiding the need to say too much and risk derailing that beautifully pure, straight-line toboggan ride through winter and spring.

Perhaps we might be able to forget, for now, all that slightly annoying dilly-dong business. Or emerge without any lasting memory of the sourness of the ending, an abrupt departure via club statement that in time will melt away, leaving just the cloudless memories of the most sensational league title victory in modern football history.

As the mists surrounding Ranieri’s departure begin to clear there are probably two things left worth saying.

First, the narrative arc is now complete. A wild, improbable, but still oddly symmetrical story reached its pitch in May when Leicester fans in pizza suits danced in the stands, the skies thundered, everybody cried and Andrea Bocelli hit the big fat, emotional high notes.

Ranieri’s arrival at the King Power had been met with wariness and some suspicion. His success brought glorious disbelief. His departure has been followed now by a wave of sentiment, a collective intake of breath at the sheer audacity of this tale of rise and fall.

On which note – and notwithstanding the sense of outrage, the continuing Claudio Ranieri memorial garden-of-hope shtick – the second thing to say is that sacking him does make sense.

It might not be the kindest option, which would have been to wait until the summer either way. But getting rid of Ranieri now is hardly madness.

The sacking of a 65-year-old manager who spent more than £80 million in the close season, went out of the FA Cup to League One opposition and now faces relegation is hardly out of keeping with football’s wider history.

Managers have always been disposable patsies, balm to the ire of the crowds, a stick to be waved, vaguely, at the players.

The great Stan Cullis was sacked by Wolves two days after returning from a convalescent home in Eastbourne. The Everton manager Johnny Carey was sacked in a London taxi. Peter Cormack was sacked by Cowdenbeath at a roadside burger van on the Forth Bridge.

Leicester were heading for relegation. The great book of football truisms says sacking Ranieri might just reverse the process.

The anomaly springs, of course, from the sheer scale of last season’s glory, a sense that the greatest title victory of the age might be enough to buy a little more time, to provide a sentimental insulation, to suggest the manager responsible is still the best man to turn it around. And yet there is no real case for applying such extended logic here.

There is still no sensible explanation of how Leicester actually managed to play so relentlessly above themselves for nine months. Momentum from the season’s end, perhaps. Talented, much-travelled players performing at their absolute best, and all at the same time. A simple game plan. The failure of opponents to adjust in time. A steady hand. Magic. Fairy dust. Luck.

Ranieri was responsible for at least half of this. It has been suggested the only real change made to Nigel Pearson’s team of the season before was the addition of N’Golo Kante. A cruel judge might even say Pearson’s team won the league while Claudio’s team, replete with new faces and relentless tinkerings, are currently fourth from bottom.

This isn’t quite right.

Ranieri did shift things around last season. Jamie Vardy played centrally the whole time. Counterattack and tight four-man defence were relentlessly applied. Ranieri got more than any manager has before out of Danny Drinkwater.

Is it the changes since that have been so profoundly unsuccessful?

This is the nature of fairy stories, magical transformations. They don’t last, and often to dramatic effect. There is a casual cruelty in the fact it should be that powerfully bonded dressing room, source of Leicester’s strength, that should end up getting rid of Claudio.

Reports suggest the players have questioned his selections and tactics, cue for head-shaking from some.

But then the players were probably right. Ranieri’s selections have been weird at times. The dressing room may have been lost. But so too have quite a lot of games.

Against Millwall Leicester were unrecognisable in personnel and spirit. Against Sevilla Ahmed Musa started ahead of Demarai Gray, source of some consternation among the players.

Winning the league the year before doesn’t change any of this. Trajectory is everything in football. And Leicester really were heading down, despite having already embarked on one of the least impressive big-money spending sprees in recent footballing memory.

Much is often made of Tottenham’s splurging of The Bale Money. But Islam Slimani, Musa and Nampalys Mendy are right up there when it comes to low-impact, big-money transfer hauls. Musa was reportedly so spooked by the shift in physical intensity from the Russian league he needed a break to recover in early season. Ranieri is only one part of the recruitment team. But this really doesn’t sound very Leicester, does it?

Leicester have lost seven of their last nine games. They still have to play Liverpool, Arsenal, Everton, Tottenham and Manchester City, all of whom might fancy a little payback after the operatic humiliations of last season. Never mind panic, betrayal, moral turpitude, lost footballing souls and all the rest. Sentiment rather than good sporting sense would have kept Ranieri in place for this.

And yet the achievement here was always essentially sporting in nature, an alchemy of discipline and fine margins, clear thought and hard-headed professionalism.

The 20th-richest club in the world – just behind Internazionale, ahead of Monaco, Sevilla and Porto – has a right to expect a certain level of achievement. In reality it seems the players have been distracted, unable to cope with the magnitude of their own unexpected success.

The manager has been unable to clear heads, reset the dials, engender enough fear and competitive desperation to reboot the machine. Leicester won the title last year by being ruthless and clear-sighted.

The same qualities have now dispensed, rightly or wrongly, with one of the chief architects of that success, a final note that leaves Ranieri free to take a final tour of the hot spots, to land that China gig, safe in the knowledge nothing will ever dim the narrative lustre of that single, pared-back year of living gloriously.