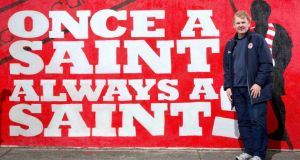 St Patrick’s Athletic can move to the brink of clinching the title tonight at the Belfield Bowl where three points would put them six clear of nearest rivals Dundalk with the three rounds of games remaining.

The Dubliners have benefitted over the past week from slip ups by both Sligo and Dundalk but continue to produce the good themselves with Liam Buckley’s side now 11 unbeaten in the league, a run during which they have dropped just eight points.

The visitors will be shorn of some of their creativity for their latest encounter with a side they put five past in June as both Killian Brennan and Daryl Kavanagh are ruled out by suspension but have strong options, including Chris Forrester available to come in.

Kenny Browne, meanwhile, is set to return to the heart of the team’s defence for Aidan Price after serving a one match ban. “Anyone who has come in recently has really been on top form,” says Browne. “Everyone really is chipping in for us at present. It’s a massive game for us, we all know that. We know what we have to do so we’re just excited to go out and there and do it.”

As he tries to ensure that his side completes its scramble to safety at the other end of the table, Martin Russell has a string of problems ahead of the game with the disappointment of last weekend’s defeat in Cork having been compounded by the number of injuries his side picked up along the way.

Underdogs
The hosts are set to be without David O’Connor, Gareth Matthews, Sean Russell and Mark Langtry, Cillian Morrison and Tom O’Halloran for a game they would have started as underdogs even if they had everybody available but Russell insists they have a crack at turning the league leaders over for the first time this season.

“St Pat’s have proven to be worthy champions in waiting,” he says, “but we will be out to do our best to prove our own players credentials and further their progression by staying in the top tier.”

In rather more trouble on that front just now are Shelbourne who head to Derry in the desperate hope of putting some daylight between themselves and Bray who currently occupy the automatic drop spot but only by virtue of their inferior goal difference.

Both sides have the usual long list of absentees through injury with City skipper Kevin Deery the latest of the Brandywell stalwarts to start looking towards next season when he had knee surgery in Belfast this week. The hosts are notionally still playing for third place and Europe but the reality is that they are simply trying to halt a slide of remarkable proportions with their form going into this game only fractionally better that that of their opponents – three points from six games as opposed to two from seven.

If Shelbourne do pull clear of Wanderers, and assuming they don’t somehow catch UCD, then they’ll face one of Mervue United, Waterford United or Longford Town in the promotion/relegation play-off in a few weeks time.

Mervue, who trail both of their rivals by a point, and Waterford are at home this evening, to Cobh and Salthill Devon; games both would be expected to win. Longford face a potentially trickier visit by Wexford Youths tomorrow evening.

1 Liam Toland: Larmour can distract England while others flourish
2 ‘Manchester United are lucky to have you’: Klopp responds to Donegal schoolboy’s letter
3 Solskjaer complains about Molten balls after Brugge draw
4 This month a decade ago, football and Dublin changed course
5 Six Nations: Ireland v England all you need to know guide
Real news has value SUBSCRIBE
Crossword Get access to over 6,000 interactive crosswords