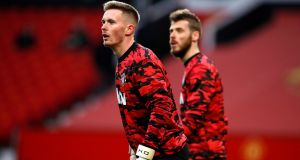 United goalkeepers Dean Henderson (left) and David de Gea. “They want to play, and that’s a competition I like.” Photograph: Phil Noble/PA Wire

Ole Gunnar Solskjær has welcomed the “bond” between Dean Henderson and David de Gea that he says exists despite fierce competition between the goalkeepers to be first choice for Manchester United.

Henderson was preferred to De Gea for Sunday’s 2-1 win over Brighton, a sign that the 24-year-old may now be considered Solskjær’s first choice given that the Spaniard had previously been picked regularly in the Premier League.

Henderson has been the regular goalkeeper in cup competitions, so if De Gea is selected for Thursday’s Europa League quarter-final first leg at Granada this could further suggest the latter has been demoted.

Solskjær would not confirm who will play, but claimed there was a good relationship between De Gea and Henderson.

“David has had 10 fantastic years at Man United and he’s had challengers [before],” the manager said. “Of course they want to play – Dean has given it his all because everyone wants that place in the team. David does as well, and it’s a healthy competition.

“Goalkeeper departments are a very tightknit group. They work together in preparation, they have different gym sessions, individual sessions [to the rest of the squad], they stay together more. Naturally they create a bond, and the spirit in the goalkeeping department has been top. But it’s a healthy competition.

“Both of them are important; all of them want to play. It’s the same for [the club’s other goalkeepers] Lee Grant, Nathan Bishop and Sergio Romero: they want to play and that’s a competition I like.

“David has been a top, top keeper and he still is. He’s working to be ready when he plays. If it’s Dean or David, I’m very comfortable with both of them, and I’m very happy that none of them are happy to not play.”

Marcus Rashford, who suffered a knock against Brighton, faces a test to determine whether he can start against Granada.

Solskjær said: “I don’t pick players when we know there’s a risk. Marcus joined in training this [Wednesday] morning so let’s see how he reacts. If there’s any risk of making it worse I’m not going to overplay him.” – Guardian