Visit of accomplished Denmark a stern test for Pauw’s Ireland 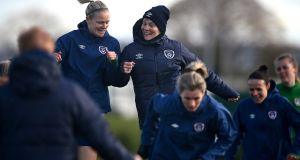 When Vera Pauw highlights her Republic of Ireland players’ need for higher quality opposition to end their major tournament drought, then benchmarking against the likes of Denmark in Thursday’s friendly can provide a swift reality check of where the side are at.

Like most Scandinavian countries, Denmark’s women’s squad tend to surpass their male equivalent’s record and they’ll be the least desirable second-seeded team Ireland could be pitted against at the World Cup draw on April 30th.

All of their stars, including the world’s most expensive player Pernille Harder, travelled to Dublin, training at windswept Clonshaugh ahead of their visit to Tallaght Stadium.

Harder captained the side during the last 2017 European Championships, scoring in the final defeat to the Netherlands, and they soared into next year’s delayed showpiece by dropping just two points from 30.

The 28-year-old striker was also a runner-up in last year’s Champions League final, her final game as a Wolfsburg player before Chelsea splashed out €300,000 to spearhead their challenge for the trophy this season.

Harder’s excellence has been especially evident to Claire O’Riordan. She marked the striker in three matches for her Bundesliga side MSV Duisburg but rightly broadened their threat to a squad laced with players operating across the best leagues in Europe.

“She [Harder] is going to be just another player on Denmark’s team,” said the Ireland defender. “Everyone knows what she’s achieved with Wolfsburg and Chelsea but Denmark are preparing for a major tournament and we’ll be doing our homework on all of them.”

Ireland have their own timeline before they resume competitive action, completing this window on Sunday against a Belgium side positioned just one spot behind the Danes in the Fifa rankings in 15th. Ireland will have two more friendlies in June before qualification begins for the 2023 World Cup.

Pauw has promised to give those on the periphery ample game-time in what are her first friendlies since being appointed in September 2019, meaning Limerick native O’Riordan will finally get her first start involvement under the manager.

“I believe in my ability as a player,” she asserted. “I’ve developed and improved an awful lot since moving over to Germany but the main thing is the balance within the team. Vera has her decisions to make.”

Meanwhile, among the few spectators in Tallaght will be Jonathan Hill. Covid-19 travel restrictions had prevented the London-based chief executive taking up residency in Dublin since starting the job on November 1st but he’s expected to attend a League of Ireland game over the weekend too.