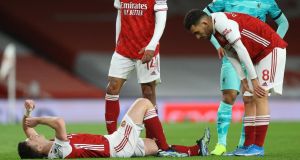 Arsenal’s Kieran TierneyTierney was replaced shortly before half-time in the 3-0 defeat by Liverpool on Saturday and the problem was duly diagnosed in his left knee. Photograph: Julian Finney/EPA

Arsenal have been dealt a significant blow by news that Kieran Tierney will be absent for up to six weeks with a knee ligament injury, meaning he could miss the rest of the season.

Tierney was replaced shortly before half-time in the 3-0 defeat by Liverpool on Saturday and the problem was duly diagnosed in his left knee. He will not require surgery and Arsenal expect him back in full training by the middle of next month. That should ensure he is available for any Europa League final on May 26th, but leaves his participation before that in significant doubt.

“It could have been worse because the action looks quite scary, but he’s feeling better and the damage is not that bad,” Arteta said.

“At the end of the day, it’s not the bad news that maybe we were expecting after the game. I don’t know [whether he will play again this season]. We’re going to have to go day by day to see how Kieran is feeling, how he is reacting. When we get close to playing time and training with the team, depending where we are and how he’s feeling, we’ll make a decision.”

Arteta also sounded a cautious note regarding Tierney’s participation at Euro 2020 with Scotland, although given they open their campaign against Czech Republic on June 14th he would appear on target for the finals.

Tierney’s hopes of further club involvement this season will be hugely boosted if Arsenal can overcome Slavia Prague in the Europa League quarter-finals. The first leg takes place at the Emirates Stadium on Thursday and they hope Bukayo Saka, Granit Xhaka and Emile Smith Rowe, who all missed the Liverpool game, will be available.

Willian is also free to play for Arsenal after being an unused substitute on Saturday. The attacking midfielder is among the depressingly long list of footballers racially abused online in recent months and he said the authorities needed to take preventative steps urgently.

“We as players cannot do a lot,” Willian said. “We do what we can do, we report it, we share it with you guys and we speak about that, but we want action. We don’t see any action from the authorities in that case. I think we have to try to stop it because it’s difficult when people say horrible words about you, your family, that’s not good.”

The Brazil international said players should share any such messages they received and that perpetrators “have to pay” for their actions. He asked social media companies to ensure users were verified in future.

“I think we have to find a way to change the profile of social media. I think people want to have Instagram, Twitter, Facebook, they need to put their ID, passport or whatever. And then when these things happen we can catch them, the authorities can catch them. That’s the action that we want.” – Guardian