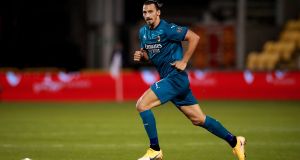 Shamrock Rovers say that Zlatan Ibrahimovic’s positive test for Covid-19 does not have any implications for their players ahead of Sunday’s trip to Oriel Park for the game against reigning Airticity League champions Dundalk.

AC Milan said that 38-year-old Ibrahimovic, who will miss the Europa League match at home to Bodo/Glimt later on Thursday, was placed in quarantine at home and the health authorities had been informed.

The announcement came one day after his team-mate Leo Duarte returned a positive test, however Milan said the rest of the squad, who were also tested, were negative.

Reacting to the news, Ibrahmimovic tweeted himself that: “I tested negative to Covid yesterday and positive today. No symptoms what so ever. Covid had the courage to challenge me. Bad idea.”

Ibrahimovic scored the opening goal in AC Milan’s 2-0 win over Dublin’s Shamrock Rovers in Tallaght Stadium in the second qualifying round on September 17th.

A spokesman for the club said that the Dublin club’s players qualified as neither “close” nor “casual” contacts of Ibrahimovic despite their proximity to him over the course of a game in which he played all 90 minutes. The HSE defines “close” contact as “spending more than 15 minutes of face-to-face contact within two metres of someone who has coronavirus indoor or outdoor”.

One of the criteria outlined for “casual” contact is “spending less than 15 minutes of face-to-face contact within two metres of someone who has coronavirus indoor or outdoor”.

Among the players to have marked Ibrahimovic during the game was Aaron Greene who also traded jerseys with the Swede immediately afterwards. The club say, however, that they believe there is no basis for concern.

The former Barcelona, Juventus, Ajax and Inter Milan forward, who will be 39 in October, is the highest-profile Serie A player to test positive since play resumed in June following a three-month stoppage.

One of Europe’s most charismatic players, he has scored 14 goals in 22 matches since returning for a second stint at Milan in January, helping revive his team.

He began the new Serie A season in style on Monday by scoring twice in the 2-0 win over Bologna.

1 Level 5 golf shutdown: Ireland one of few countries to close courses
2 Dan Martin toasting another stage win at the Vuelta
3 Disappointment and frustration par for the courses as golf goes into lockdown
4 Shock at golf clubs as sport faces shutdown in Level 5
5 Kerry v Donegal brought forward to facilitate marathon journey
Real news has value SUBSCRIBE
Crossword Get access to over 6,000 interactive crosswords