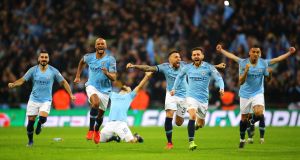 Manchester City celebrate after the penalty shootout against Chelsea in the Carabao Cup final at Wembley Stadium on February 24th, 2019. Photograph: Brunskill/Fantasista/Getty Images

The history of the quadruple in England is a short one. No one has achieved it, indifference to the League Cup being a frequent and early stumbling block, and the only two credible attempts have been Mancunian ones 10 years apart.

Only one English team have won a true treble – defined as the domestic league, major cup competition and European Cup so as to be on an equal footing with all the other leagues – and though there have been lesser threesomes over the years a clean sweep of four trophies was more improbable scenario than realistic ambition until Manchester City began chipping away at everyone’s certainties.

It is unusual to have a side in touch with the league leadership in April, through to the Champions League last eight and FA Cup last four with the League Cup in the bag, though it has happened once before. I

n 2009 Manchester United were in a similar position – in fact, with the Club World Cup there was the possibility of a five-trophy haul – yet when push came to shove and an FA Cup semi-final threatened to interfere with Champions League progress Alex Ferguson blinked and prioritised the latter. Unless and until Manchester City field a noticeably underpowered side against Brighton at Wembley there is no reason to suspect Pep Guardiola intends following suit.

Perhaps because it does not feature on a darts board the quadruple is neither as familiar nor as thrilling-sounding a target as a treble, and though the inelegant appellation is gaining traction in this country through City’s inexorable progress it has been old hat for half a century north of the border.

When Celtic became the first British team to win the European Cup in 1967, their success in Lisbon capped a grand-slam season which brought the Scottish title as well as the Scottish Cup and League Cup. Some even suggest Jock Stein’s team won a quintuple, since the Glasgow Cup also resided on the Parkhead sideboard. In terms of the quadruple City are presently seeking there can be no doubt Celtic got there first.

An English team have yet to emulate the feat in one of the few leading football nations where such a thing is possible. Most countries have only two main domestic competitions – a league championship and a cup knockout competition – with France and Portugal among the exceptions who favour an extra cup. Though the League Cup is considered an English eccentricity by managers who routinely complain about fixture overload, it is approaching its 60th birthday and meets the criteria necessary to be regarded as a major domestic trophy.

That said, it was not taken seriously by big teams at first, with the result that few early winners entertained the possibility of picking up anything else. Leeds United won the League Cup in 1968 and the title the following season, but the first hints at reaching for everything came towards the end of the 70s at the height of the rivalry between Bob Paisley’s Liverpool and Brian Clough’s Nottingham Forest.

Both won the European Cup, the first division title and the League Cup within the space of a few years, though never all at the same time and neither could win the FA Cup. Liverpool had come within a whisker of England’s first true treble in 1977, when Jimmy Greenhoff’s deflection for Manchester United at Wembley prevented them adding the FA Cup to the league title and their first European Cup, though the League Cup and any quadruple was never on following an early exit at the hands of West Bromwich.

As Liverpool were the most regular champions in the 70s and 80s they were the most obvious candidates for multiple success, and after winning the league and League Cup in 1982 and 1983 they went one better and landed a minor treble in 1984, beating Everton in the League Cup final, Roma in the European Cup final and finishing three points ahead of Southampton in the first division. This was a considerable achievement, demonstrably the most successful season in English club history, yet the FA Cup was still high on most people’s agendas and it must have irked Liverpool a little that Everton won it that year.

Liverpool’s league dominance ceased in 1990, to be replaced by that of Manchester United, but though Ferguson accomplished his perch-clearing exercise quickly enough it took him until 1999 to get to grips with a European contest that had morphed into the Champions League.

The quadruple is on, and with it the chance to eclipse what United achieved 20 years ago.

With the best team in England regularly suffering disappointment abroad the idea of claiming every prize took a back seat for a while until it all came together in Barcelona. While few could begrudge Ferguson and his players their moment of glory after their epic battles with Arsenal in both the league and the FA Cup, there was never a chance of a quadruple because of defeat by Tottenham in a League Cup quarter-final.

United’s annus mirabilis overshadowed the minor treble Gerard Houllier’s Liverpool managed two years later – League Cup, FA Cup and Uefa Cup – though as ever the league was what was important on Merseyside and it was still missing. Chelsea were unlucky in José Mourinho’s first season, when they won the league and the League Cup but lost out to Luis García’s phantom goal in a Champions League semi-final at Anfield, and United were back on the treble hunt in 2008 when they won the league and the Champions League but were knocked out of the FA Cup by eventual winners Portsmouth.

Since then no one has managed to mount an entirely convincing attempt at a treble, let alone a quadruple. United won the league and the League Cup in 2009 but miscalculated in an FA Cup semi-final against Everton before being comprehensively beaten by Barcelona in Rome, Guardiola’s side claiming the first treble in Spanish history.

Manchester City have won three titles since their Abu Dhabi makeover, though success under Roberto Mancini and Manuel Pellegrini did not lead to supremacy in Europe. Even Guardiola found that difficult and City have yet to reach their first Champions League final, but the manager can no longer dismiss the possibility of winning all four trophies with a roll of the eyes.

City have arrived, to use Guardiola’s expression for when opportunity presents itself. The quadruple is on, and with it the chance to eclipse what United achieved 20 years ago. That was hailed as a near miracle, yet the fact is that of eight true trebles since Celtic landed the first, four have been won in the last decade.

The impossible is becoming more of an everyday reality, which is something for City to bear in mind as they close on the remaining targets. With three games in 12 days against Tottenham, and Liverpool still at large in Europe, there is no need to guard against complacency, and neither should Brighton be underestimated.

Chris Hughton was on the coaching staff when Spurs prevented a Manchester United clean sweep in 1999 and Liverpool’s minor treble of 1984 might have been so much more but for a fourth-round FA Cup exit at Brighton’s Goldstone Ground. The Seagulls have already proved capable of dumping on quadruple dreams.