Security the focus as Real Madrid and Barcelona prepare for clásico 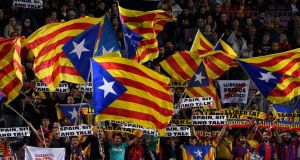 The greatest rivals in sport are going to the game together. The 243rd meeting between the world’s biggest football clubs starts at the Hotel Sofía, converted into a kind of clásico HQ, a heavily guarded bunker barely 600 metres from the Camp Nou. For the first time, Barcelona against Real Madrid was postponed because of political unrest when they were scheduled to play on October 26th. Now, almost two months on, with the potential for problems greater than it was back then, they will play – that, at least, is the intention – but it will be unlike ever before, starting with the decision to bring both sets of players together eight hours before kick-off.

Real Madrid fly at 11am and are due to arrive at the Sofía just after midday on Wednesday while Barcelona, whose players usually go straight to the Camp Nou in their cars, will turn up by bus at 12.30pm. The referee and his assistants will meet in the same place, their hotel changed from the original location two kilometres away. There both teams will eat and, on different floors of the 22-storey building on the Avinguda Diagonal, sleep. Meanwhile, downstairs the directors will have lunch together. Then, a little before six, all of them will board the buses and vans that take them to the ground, police opening a pathway to the game.

Security more than sport has been the focus of the buildup to this clásico, although Zinedine Zidane insists that all he has been focusing on is the game. In his case, that is true; for others, it is not.

This season’s first meeting between these two football clubs who are rarely just football clubs was postponed following unrest in the city after the jailing of nine Catalan political leaders for their role in a referendum declared illegal and a failed push for independence. There were protests across the city and clashes with police.

Photos appeared of Barcelona’s midfielder Ivan Rakitic walking along the edge of the motorway wheeling a suitcase having arrived at Barcelona airport to find it had been subject to a blockade by protestors, with cars and most passengers unable to get in or out. Barcelona’s manager, Ernesto Valverde, had eventually got away incognito on the back of a motorbike, following behind an ambulance, but missed the team’s training session. He later returned to the airport to rescue the midfielder Frenkie de Jong, who had been trapped there for hours.

The league originally requested that the order of the clásicos be changed – instead of playing at the Camp Nou, they would play at the Santiago Bernabéu – but that idea was rejected by both clubs and the federation’s competition committee eventually resolved to postpone the game, rescheduling it for December 18th. Barcelona had been keen to maintain the original plan, and security forces had suggested that the game could have gone ahead.

The league’s president, Javier Tebas, a supporter of the far-right party VOX and an outspoken critic of the independence movement, had been keen to avoid Spain’s showpiece game being used as a political platform or a stage for protests. Two months on, though, that is even more likely. The Catalan political movement Tsunami Democratic, which led some protests in October, has been open in its desire to make use of the exposure provided by a match due to be televised in more than 100 countries to express its position under the slogan: “Spain, sit and talk.”

It has said that there is “no platform greater”, while many in Catalonia project Real Madrid as the embodiment of centralist Spain, the state; not just a team to win against but a rival to be defeated.

Originally, Tsunami Democratic publicly requested that the two clubs support it in its aim to get the Spanish state to negotiate a political settlement with Catalonia but, although there were informal talks with Barcelona about what degree of political manifestation the club would allow within the stadium, that request fell on deaf ears. It has reiterated that it does not plan to prevent the game going ahead – that would deny it the platform it seeks – but it says it has 25,000 people ready to put its plans into action.

Exactly what those plans entail is not known but there are fears of a pitch invasion, and it has called people to four strategic points around the ground three hours before kick-off, meaning that security forces have worked on the idea that it may try to create a blockade. Police authorities have said they are confident the game can take place safety, with more than 1,000 officers on duty plus 2,000 stewards, but special plans have been drawn up, and that will affect the players. “If we have to go together, we’ll go together,” Zidane said.

How security forces and football authorities react to any protest, banners and chants will be watched very closely – all the more so after a Spanish game was stopped for the first time last weekend when Rayo Vallecano aimed chants at Albacete’s Ukrainian forward Ramon Zozulya, whom they accuse of being a Nazi. He has denied ever belonging to far-right groups. The incident has set a precedent which could be applied again. Indeed, preparation for the clásico may be part of the explanation as to why the federation and the league took that unprecedented step on Sunday.

“All security measures have been taken,” said José Guirao, the minister for culture and sport. “We have to treat this as what it is: the two best teams in the world, playing at an extraordinary level. It’s sport. It’s just a football match.”

It’s never just a football match, but it might well be the very best there is. “I never doubted this would go ahead,” Zidane said, and it could hardly be closer: the two biggest teams in Spain, or anywhere, joint top of the table, separated only by goal difference, and with the all-time score standing at Barcelona 96 wins, Real Madrid 95. Both were held in difficult away games last weekend; Barcelona drew 2-2 at Real Sociedad on Saturday, Madrid drew 1-1 at Valencia the following night, that extra day’s rest a bone of contention. That leaves them both on runs of two draws and six wins in their past eight games.

“Yes they have Messi, but we have our weapons too,” Zidane said. Karim Benzema especially: he, like Messi, has 12 league goals this season. Zidane will also have Casemiro back: he was left out on Sunday to avoid getting the yellow card that would have led to him missing out, so he will be one of 50 footballers boarding buses at the Hotel Sofía just before six on Wednesday evening.

“You can’t ever be worried about a game like this,” Zidane said. “Of course you can enjoy it: it’s a game of football and you live for games like this.” – Guardian

1 Ireland 23 Georgia 10: How the Irish players rated
2 Ireland grind their way to grisly win over Georgia
3 No fireworks but Limerick get the job done against Galway
4 Jim McGuinness: There is a way to save championship and make it competitive
5 Billy Burns provides silver lining to gloomy Ireland display
Real news has value SUBSCRIBE
Crossword Get access to over 6,000 interactive crosswords